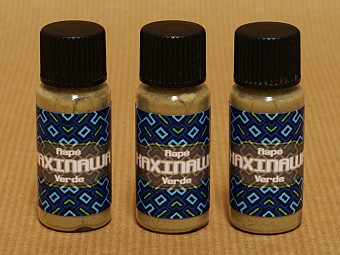 (Batch #4113) Kaxinawa Verde has been produced especially for spiritual cleansing and positive energy flow. It has a very different aroma than most, and contains mostly a plant locally known as Xina Iniuati, which gives it its green color. This particular Rapé has been prepared by a Shaman in his early 40’s who is learning alongside his brothers from their father, a well respected shaman of the Jaguar clan. More information below. Limited stock. A must-have for the collector and connoisseur.

Limited stock! A must-have for the Rapé collector and connoisseur.

This very rare and genuine tribal Rapé called Kaxinawá Verde has been produced especially for spiritual cleansing and positive energy flow. It has a very different aroma than most, and contains mostly a plant locally known as Xina Iniuati, which gives it its green colour. This particular Rapé has been prepared by a shaman in his early 40’s who is learning alongside his brothers from their father, a well respected shaman of the Jaguar clan. This Rapé is powerful and extremely intense. A lot of residue is forced from the body and much phlegm is ejected after the initial effect. Overpowering flavour and tendency to find its way into the back of the throat are to be expected. This is a new batch from this rare and famous Rapé.

This is an extremely fine powder, creamy to the touch. It takes great effort to produce such a fine powder, entirely void of stems, veins, grains and bits, and at a 150 micron fineness. This is our standard because this provides the best Rapé experience. All our Rapé varieties are processed to a high standard and a consistent fineness, using laboratory grade sieves and milling equipment.

No information is known about the precise content, or type of Tobacco in this unique and rare Rapé.