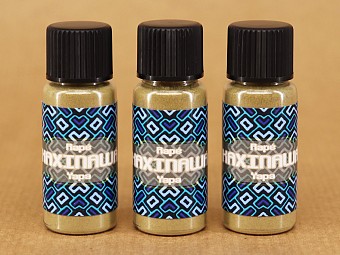 (Batch #3411) This rare Rapé from the Kaxinawa tribe was made by two Rapé makers, sons of the main village shaman who is around 80 years old. This Rapé contains a herb called Shishitza, Yapa tree ash, and Moi Tabaco. Shishitza herb is used to harmonize the body and to attract positive thinking. It's effects are gentle, a user used to strong varieties may find it subtle however there is a beautiful sense of relaxed clarity that goes with this Rapé. More information can be found below. 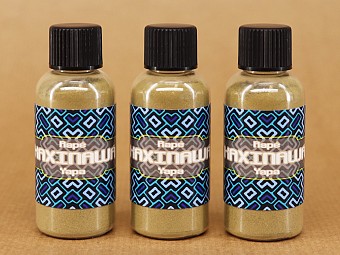 This rare Rapé from the Kaxinawa tribe was made by two Rapé makers, sons of the main village shaman who is around 80 years old. This village lies in the Tarauaca municipality, in the state of Acre. This Rapé contains a herb called Shishitza, Yapa tree ash, and Moi Tabaco. Shishitza herb is used to harmonize the body and to attract positive thinking.

The Rapé has a green-grey colour, though not as green as the Apurina varieties or Nunu. It is relatively gentle on the sinuses unlike many other varieties and for this reason could be a good Rapé to introduce to a newcomer to Rapé. It's effects are gentle, a user used to strong varieties may find it subtle however there is a beautiful sense of relaxed clarity that goes with this Rapé. The Kaxinawa use their Rapé for connecting with the spirit of the jungle and there is something about this Rapé that makes that nature connection seamlessly.

This Rapé was made under guidence of tribal elder paje (shaman) that is passing on his great knowledge to the future generation so the tradition would live on. Money made by making the Rapé goes to the good of the community that is now finalising the construction project of the medicine house. The construction which started some years ago is almost reaching completion. The people are also making an area inside the medicine house they call "laboratory" where they intent to produce natural oils from aromatic and healing plants.

Rapé in the Kaxinawas tribe is used for different purposes. In addition, the Kaxinawas apply rapé for mental healing, mostly in combination with chanting. Rapé connects the tribe with spirits of the jungle and - depending on the exact ingredients - it can cure, heighten concentration, improve hunting, or be a connector with the spiritual nature.