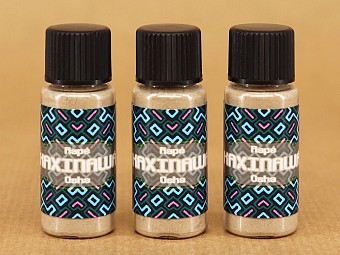 (Batch #4905). Kaxinawa Osha is blended by ourselves using Kaxinawa Rapè base featuring Murici and Cacao and a measured amount of powdered Osha root and liquid extract of it. The Rapè has a medium-dark grey complexion and has a distinct sharp, warming and bitter aroma imparted by the Osha root. The immediate effect is relatively sharp, causing immediate eye watering. Once the nose is blown it feels very clearing on the sinus and breathing, leaving the distinct warm aroma behind. More information can be read below. 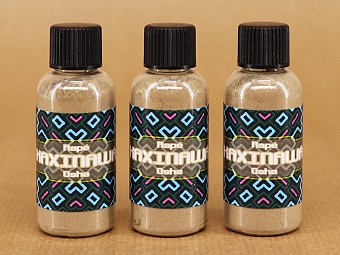 Kaxinawa Osha is blended by ourselves using a Kaxinawa Rapè base of Murici and Cacao and then adding a measured amount of powdered Osha root and liquid extract of it. The Rapè has a medium-dark grey complexion and has a distinct sharp, warming and bitter aroma imparted by the Osha root, once experienced not forgotten!

The immediate effect is relatively sharp, causing immediate eye watering. Once the nose is blown clear it feels very clearing on the sinus and breathing, leaving the distinct warm aroma behind. It is a clearing Rapè both physically and mentally, it is not too heavy but has a sense of strength to it. It gives the body and mind a lightness and relaxation that is entirely pleasant combined with a sense of receptivity.

Osha root (Ligusticum porteri) is a very interesting herb. This is one of the most important herbs of the Rocky Mountains, considered sacred by the Native Americans and widely esteemed by them for its broad and effective warm healing power. Many tribes burned it as incense for ritual purification to ward off airborne illness in their homes and also subtle negative influences and thoughts. Osha is said to be associated with mystical dreaming as well. The strength of this herb is immediately apparent by its strong odour.

The common Mexican name for the plant "Chuchupate" is said to be an ancient Aztec term meaning "Bear medicine". Bears respond to the herb like cats do to Catmint (Nepeta cataria). They will roll on it and cover themselves with its scent. Males have been seen to dig up the roots and offer them to females as part of courting. When a bear first comes out of hibernation, it will eat Osha if it can find it, to cleanse its digestive system. The bear will chew the root into a watery paste, then spit it on its paws and wash its face with the herb. It will then spray the herb over its body as the herb possesses strong action against bodily parasites. It is not known how the bears came to acquire this herbal knowledge, but their use is legendary in all cultures who refer to it as such: Bear roots. This is the reason that the bear is considered to be the prime healing animal in many cultures because it uses plants for its own healing.

"...I only have a small sample of this Rapé, but I used it in a group session, because, I had to. The power of the bear really came in the room. Strong animal power energies, lots of heavy processing within the group. Men and women finding their strength through singing and dancing like warriors, it was a very strong session with a very powerful energy, I am sure that this Rapé will become one of Katukina's strong standards..."

Kaxinawa means "People of the Bat" and is a name that was given to them by other enemy tribes. They are one of the biggest tribes in Acre state spread over different areas of the state with many communities and still exist in Peru as well. The Kaxinawas or Huni kuin (meaning true humans) are considered to be one of the biggest tribes in Acre, as they account for 42% of the indigenous population. They belongs to the Pano linguistic tribes that habitat the Peruvian and Brazilian Amazon. Moreover, their leader is a respected shaman that vigorously stands up for his tribe in public and through organizations: he founded the União das Naçoes Indigenas (UNI/AC) and ASKARJ, and he is a cofounder of the Alliance of Forest Peoples and of the International Council on Human Rights (IACHR). These organizations are speaking for the rights of the indigenous communities, as well as for human rights and the protection of the rainforest (Aya Conference 2014, Ibiza).
Rapé in the Kaxinawas tribe is used for different purposes. In addition, the Kaxinawas apply rapé for mental healing, mostly in combination with chanting. Rapé connects the tribe with spirits of the jungle and - depending on the exact ingredients - it can cure, heighten concentration, improve hunting, or be a connector with the spiritual nature.