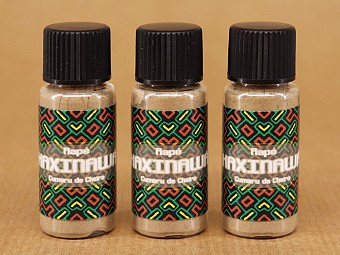 (New batch #7911). Highly praized. Similar to many "Forca" types this particular Rapé is extremely powerful on the inset. If the body is too congested with toxins, some nausea and purging may follow and the effects seem to flow through the body rather then the mind. Afterwards a floating sensation is noticed. Care is needed to not overdo the amount taken. Be gentle and moderate in your first connection to this Rapé. This variety is extremely strong. More information can be read below. 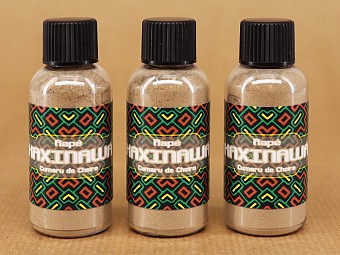 New batch. Note that some difference in texture and effect can be expected from a new batch.

This is a very popular and highly praized Rapé. Although they are known as Kaxinawa, they call themselves the Huni Kuin which means “true people”. The Kaxinawá are noted for making some of the strongest Rapé available. The Kaxinawa people are some of the most experimental tribes when it comes to making Rapé: They do not have traditional recipes that would come always as the same, rather they use innumerous plants and different ashes in their varied mixtures.

Amburana Cearensis is more commonly known as Imburana, Amburana or Cumaru de Cheiro, not to be mistaking with normal Cumaru although the smell is similar and the plants are related. The seeds are quite commonly used to give a special smell to Rapé, not only the indigenous but also the traditional snuff. The Huni Kuin have also used the bark for making ashes for Rapé. As one after getting more familiar with the use of indigenous Rapé will start to notice that all ashes have their own quality and effect, some more light on the nose, some a bit sharp, some making the Rapé stronger and all have their particular qualities. This one is a bit lighter then the normal Cumaru but has a nice deep effect.

Cumaru de Cheiro has a strong inital effect with a typical "grey" flavour. Very fresh overall with a heavier vibration to follow and time is needed to process. Similar to many forca types this particular variety is extremely powerful on the inset. If the body is too congested with toxins, some nausea and purging may follow and the effects seem to flow through the body rather than the mind. Afterwards a floating sensation is noticed. The powder easily makes it way into the back of the throat and can cause extra purging even after the main effects have worn off. A lot of residue is forced from the body and much phlegm is ejected afterwards. Over all an extremely potent preparation from the Kaxinawa tribe. Care is needed to not overdo the amount taken. Be gentle and moderate in your first connection to this Rapé. This variety is extremely strong.

The Kaxinawa prepare some of the most powerful varieties available for self healing and shamanic discoveries. Much like a traditional Forca variety this blend is extremely strong and after the intensity resides one feels deeply relaxed and in a calm state of being for many hours. The first moments can be quite intense and the possibility of some purging is possible. Tears will no doubt be instantaneous and the suggestion of being seated before application is advised. It can take more time than usual to expel the powder completely from the nose and for some time afterward it will continue to slowly make its way in the the back of the throat. Overall the experience is very comforting and after such an intense start it completely shakes away any and all background chatter and helps calms the mind and physical body to an almost mediative state. This Rapé is best used in ritual settings.

This is another genuine tribal and powerful Rapé obtained through our close friend who lives in Brazil and is exchanging with the tribes people.

Kaxinawa means "People of the Bat" and is a name that was given to them by other enemy tribes. They are one of the biggest tribes in Acre state, spread over different areas of the state with many communities and still exist in Peru as well. The Kaxinawas or Huni kuin (meaning true humans) are considered to be one of the biggest tribes in Acre, as they account for 42% of the indigenous population. They belongs to the Pano linguistic tribes that habitat the Peruvian and Brazilian Amazon. Moreover, their leader is a respected shaman that vigorously stands up for his tribe in public and through organizations: he founded the União das Naçoes Indigenas (UNI/AC) and ASKARJ, and he is a cofounder of the Alliance of Forest Peoples and of the International Council on Human Rights (IACHR). These organizations are speaking for the rights of the indigenous communities, as well as for human rights and the protection of the rainforest (Aya Conference 2014, Ibiza).

In addition, the Kaxinawas apply Rapé for mental healing, mostly in combination with chanting. Rapé connects the tribe with spirits of the jungle and - depending on the exact ingredients - it can cure, heighten concentration, improve hunting, or be a connector with the spiritual nature.

This mixture contains Nutmeg, Amburana and ashes that are generally called Cinza. The source of the ashes is the tree called Platycyamus regnellii. Amburana belongs to the Fabaceae family.