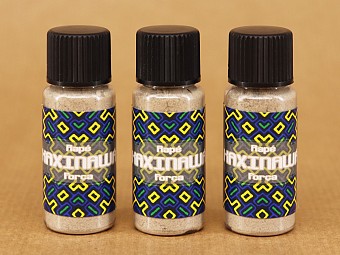 Restock expected in February. One of the most popular and sought after Rapé’s we have to date. This batch of Força is amazingly sharp and an extremely clear vibrational Rapé that forcefully brings peace of mind and grounding to the user. The Kaxinawa people are some of the most experimental tribes when it comes to making Rapé: They do not have traditional recipes that would come always as the same, rather they use innumerous plants and different ashes in their mixtures. It is predominantly Murici ashes that characterise this Rapé. More information below.

New batch. Note: As with all Rapé, differences between batches are to be expected, for those used to this variety you will find this batch slightly different than you may be used to.

This is one of the most popular and sought after Rapé’s we have to date. Rapé made with ashes of Murici is a traditional recipe from the Kaxinawá. This batch of their Força is amazingly sharp and an extremely clear vibrational Rapé that forcefully brings peace of mind and grounding to the user.

Although they are known as Kaxinawa they call themselves the Huni Kuin which means “true people”. The Kaxinawá are noted for making some of the strongest Rapé available. The Kaxinawa people are some of the most experimental tribes when it comes to making Rapé: They do not have traditional recipes that would come always as the same, rather they use innumerous plants and different ashes in their mixtures. It is predominantly Murici ashes that characterize this Rapé.

The initial sensation is that of a sharp nail entering the centre of senses with force, that instantly blanks out any mind activity. It opens the sinuses as energy vibrates through the body leaving with a clear mind and a comfortable buzz. A definite favourite of the many who have used it, in high or low doses. Barely any makes its way to the throat, and being a very fine powder it tends to absorb directly into the vessels of the nose. Very calming after effects with a subtle pressure behind the eyes. Excellent to be used in the evening and to gain focus and power. Barely any physical purging is noticeable to the user but the mind is cleared instantly leaving a calm and serene state. As with all Força preparations, this high standard of authentic Rapé continues to excel above the rest. Origin: Brazil, Acre.

This is an extremely fine powder, creamy to the touch. It takes great effort to produce such a fine powder, entirely void of stems, veins, grains and bits, and at a 150 micron fineness. This is our standard because this provides the best Rapé experience. All of our Rapé varieties, be it a genuinely tribal Rapé, Cinza (ashes), or Tabaco powder, we process this to a high standard and consistent fineness, using laboratory grade sieves and milling equipment.

Kaxinawa means "People of the Bat" and is a name that was given to them by other enemy tribes. They are one of the biggest tribes in Acre state spread over different areas of the state with many communities and still exist in Peru as well. The Kaxinawas or Huni kuin (meaning true humans) are considered to be one of the biggest tribes in Acre, as they account for 42% of the indigenous population. They belongs to the Pano linguistic tribes that habitat the Peruvian and Brazilian Amazon. Moreover, their leader is a respected shaman that vigorously stands up for his tribe in public and through organizations: He founded the União das Naçoes Indigenas (UNI/AC) and ASKARJ, and he is a cofounder of the Alliance of Forest Peoples and of the International Council on Human Rights (IACHR). These organizations are speaking for the rights of the indigenous communities, as well as for human rights and the protection of the rainforest (Aya Conference 2014, Ibiza).

In addition, the Kaxinawas apply Rapé for mental healing, mostly in combination with chanting. Rapé connects the tribe with spirits of the jungle and - depending on the exact ingredients - it can cure, heighten concentration, improve hunting, or be a connector with the spiritual nature.

The Murici tree (Byrsonima crassifolia) comes from the Malpigheaceae family and is an evergreen tree that is widely distributed in South and Central America and Mexico.