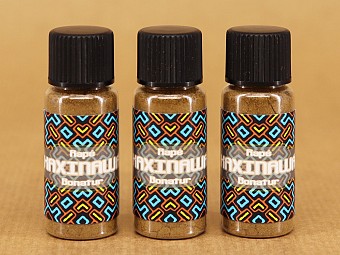 (Last restock Batch #3951). This Rapé was made by a Cacique (chief) of a village in the smallest tribal land of Acre state. This preparation of Rapè is made with organic Moi Tabaco and a special herb from their culture and region called Bonatura. This Rapè has a most prestigious and wonderful scent as well as a pleasant aftertaste. Not to be missed. They say it cools the mind and the head. An renowned recipe from the Pajé Teta Puã. Not to be missed. More information below. 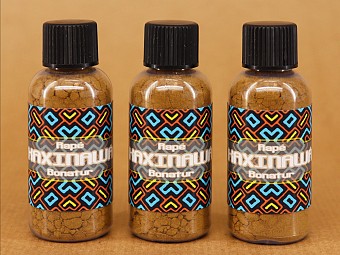 This Rapé was made by a Cacique (chief) of a village in the smallest tribal land of Acre state, on the land called Vinte Sete, translated to 'Twenty-Seven' in English. It's the smallest but also the most productive indigenous land where they plant many different crops and have many ponds for growing fish. This preperation of Rapè is made with organic Moi Tabaco and a special herb from their culture and region called Bonatura. A little known herb that is from their own perticular culture and is unlikely to be found in the preperations of any other tribal groups. An renowned recipe from the Pajé Teta Puã. They also use it in herbal baths for the same reasons, reasoning why they like to put it in their Rapé as well. This Rapè has a most prestigious and wonderful scent as well as a pleasant aftertaste. Not to be missed.

This is an extremely fine powder, creamy to the touch. It takes great effort to produce such a fine powder, entirely void of stems, veins, grains and bits, and at a 150 micron fineness. This is our standard. All of our Rapé varieties are processed to a high standard and a consistent fineness, using laboratory grade seives and milling equipment.

"...This deeply dark brown Rapé has its own rich aroma and distinct feel to it. In larger quantities it can be quite overwhelming and deeply cleansing. For the novice very small amounts are advised. The more experienced of those will find it to be cutting edge when it comes to the continued effects of this blend. Without a doubt, each time the blend is administered it never fails to fully overcome ones physical and mental state. A safe clear setting is advised along with time and space to really appreciate the cleansing. Some purging is likely but usually only when the physical body is out of alinement with ones own natural order. This blend will no doubt exercise a large quantity of phlegm form the body. As a creamy fine dark brown powder it will absorb well into the system but will also find its way downwards into the throat creating its own unique flavour in contrast to most grey type blends. Another wonderful gift..."

The Kaxinawá's or Huni kuin – meaning true humans - are considered to be one of the biggest tribes in Acre, as they account for 42% of the indigenous population. They belongs to the Pano linguistic tribes that habitat the Peruvian and Brazilian Amazon. Moreover, their leader is a respected shaman that vigorously stands up for his tribe in public and through organizations: he founded the União das Naçoes Indigenas (UNI/AC) and ASKARJ, and he is a cofounder of the Alliance of Forest Peoples and of the International Council on Human Rights (IACHR). These organizations are speaking for the rights of the indigenous communities, as well as for human rights and the protection of the rainforest (Aya Conference 2014, Ibiza). In addition, the Kaxinawá apply Rapé for mental healing, mostly in combination with chanting. Rapé connects the tribe with spirits of the jungle and - depending on the exact ingredients - it can cure, heighten concentration, improve hunting, or be a connector with the spiritual nature.