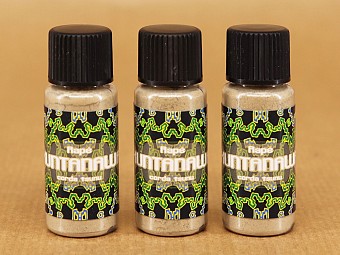 (New batch #8821) This sublime Rapé from the Kuntanawa is a light sand brown colour, not grey and not true brown. The flavour is reministent of a warm indian spice (subtly so) though it is not hot on the sinuses. It has an exquisitely sharp slicing initial hit that forces ones attention into focus. Immediately following application there is eye watering, which can feel very cleansing for tired eyes! It is very uplifting & energising on ones being, a feeling of soaring like an eagle yet with a simultaneous sense of connection, receptivity and focus without any heavy body load. More information can be found below. 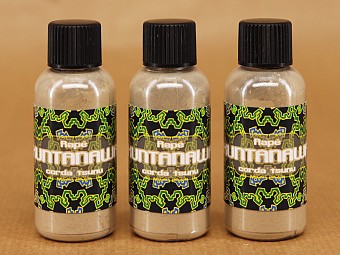 A sublime new Rapé from the Kuntanawa family! The Kuntanawa make most of their Rapé's with the local Moi Tabaco. This one however is made with a more powerful Corda Tabaco, made with the same methods and intentions yet resulting in a more powerful Rapé. While the Moi works strongly on the heart center and is great for soft meditation, the Corda Tabaco works more on the base center and connects to the earth, yet bigger doses take one of to higher planes as well. This Rapé is made with Tsunu ashes and a touch of Apuxuri, to neutralise the Tobacco flavour and give it a little freshness.

This Rapé is a light sand brown colour, not grey and not true brown. The flavour is reminiscent of a warm Indian spice (subtly so) though it is not hot on the sinuses. It has an exquisitely sharp slicing initial hit that forces ones attention into focus. Immediately following application there is eye watering, which can feel very cleansing for tired eyes! It is very uplifting and energising on ones being, a feeling of soaring like an eagle yet with a simultaneous sense of connection, receptivity and focus without any heavy body load. This Rapé really tunes one in to one's environment and would be great used in nature.

This Rapé and other medicines produced by the Kuntanawa are a cooperation between many members of the family. The Rapé maker who does the final work and gives his personal touch to it has much help from others. It is always a group effort, where one collects the woods and barks and produces the ashes, another helps with collecting, drying and pounding the tabaco. This way effort is shared and the returns are shared with the community.

"...My first experience with this blend. As I can consider myself an experienced user, I took 1,5 spoon of this nice Rapé. It smells really soft. It didn't hurt at all in the nose, so it was very gentle. This Rapé did not sink to the throat and continued to vibrate behind my eyes. It was a rather intense energetic experience, which caused a special shift in my energy field. I felt not so much the energy shifts in my body, but rather around my body. I was very aware of the shifts just on the outside of my body. It gave me a push to move the body a little and not just stay in the experience, as I usually do, by meditating. Shaking the hands, massaging the feet, making sound, it was what made this Rapé move in me to deal with this energy. A soft Rapé, with a fairly short but intense energy peak, and then a long subtle presence felt afterwards. The Rapé did not sink too strongly to the throat, so there was little inclination to purify. Lightly tearing eyes and little mucus formation. This Rapé vibrated more around my body and remained concentrated around the eyes. Thank you for this experience and the wise lessons that are hidden in it for me personally, maestro Tabaco..."

Like the Nukini, the Kuntanawa tribe became almost extinct due to the massacres of the latex cycle. One single family was left after the rubber boom and only since the beginning in 2000 a small group of Kuntanawa started to claim their indigenous heritage (Pantoja et al. 2014; Labate et al. 2014). Unfortunately, their culture is still under threat and the Kuntanawa are still struggling to regain full ethnic recognition and they are trying to regain their territory. Nowadays, there are only about 250 members left that are scattered throughout the region of Acre, Brazil. In order to survive, the Kuntanawa are joining other Pano linguistic tribes and they are organising festivals together to share their traditions, their rituals, and their culture with foreign visitors. This small Pano linguistic tribe strongly values the ritualistic use of Ayahuasca to teach them and to guide them. The Kuntanawa even hold a strong believe that Ayahuasca will unravel their ancient knowledge and bring back their partly lost traditions (Pantoja et al. 2014). However, their language seems to be irrecoverably lost (Labate et al. 2014).

More on the Kuntanawa.