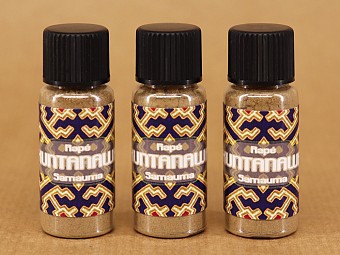 (New batch #4527) This classic and famous Rapé is now back in stock! This very special and rare Rapé of the Kuntanawa tribe in Acre, Brazil, is based on an old traditional recipe which is not shared with non-tribal people. The Kuntanawa Samauma contains parts of the sacred Samauma tree, which is one of the largest trees in the Amazon. The Kuntanawa hold a long tradition with creating and using Rapé and infuse the mixtures with intentions of power, healing, and cleansing. More information below. 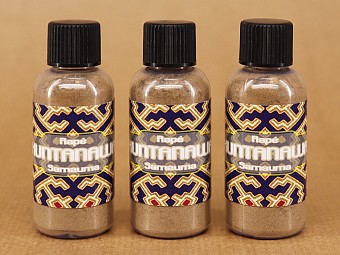 This classic Rapé is from the time we started our company years ago. Finally we have it back in stock.

The Kuntanawa tribe, or “Coconut people”, pervaded this unique and powerful Rapé with pure healing and cleansing purposes. This secret recipe is composed by the shaman of the tribe and contains many sacred and healing plants from the amazon. Watering of the eyes come almost immediately followed by a deep powerful feeling throughout the entire head and body. Tendency to purge is again minimal but some time is needed to reground after the experience. A pleasant but strong flavour can find its way into the throat at larger doses. This Rapé is more physical and balanced than other blends which seem to effect the head more.

The Kuntanawa use Rapé to empower their intentions and healing abilities, and to connect with the spirit world. When using the Rapé of the Kuntanawa, a connection with the spirits of the jungle and a strong aiming of the mind can be felt. It is created with the intent to heal and cleanse, by harmonising energies, thoughts, and emotions. Origin: Brazil, Acre.

Like the Nukini, the Kuntanawa tribe became almost extinct due to the massacres of the latex cycle. One single family was left after the rubber boom and only since the beginning in 2000 a small group of Kuntanawa started to claim their indigenous heritage (Pantoja et al. 2014; Labate et al. 2014). Unfortunately, their culture is still under threat and the Kuntanawa are still struggling to regain full ethnic recognition and they are trying to regain their territory. Nowadays, there are only about 250 members left that are scattered throughout the region of Acre, Brazil. In order to survive, the Kuntanawa are joining other Pano linguistic tribes and they are organizing festivals together to share their traditions, their rituals, and their culture with foreign visitors.

This small Pano linguistic tribe strongly values the ritualistic use of Ayahuasca to teach them and to guide them. The Kuntanwa even hold a strong believe that Ayahuasca will unravel their ancient knowledge and bring back their partly lost traditions (Pantoja et al. 2014). However, their language seems to be irrecoverably lost (Labate et al. 2014).

Besides Tabaco, ashes and other sacred ingredients not known to us, this Rapé contains ashes and parts of the Samauma tree, or Ceiba Samauma. The Samauma tree (Eriodendron samauma) belongs to the Bombacaceae family and – due to its 25-50 meter height - it is sometimes called the "Queen of the Forest". The tree is considered sacred by the Kuntanawa, and often added to Ayahuasca drinks (Labate et al. 2011). This sacred tree is, in addition, used for dieting by Peruvian vegetalistas to obtain special powers of plant spirits (Sanz-Biset et al. 2011). Moreover, the fresh stem is prepared as a drink and consumed against internal inflammation and kidney pain (Tene et al. 2007).