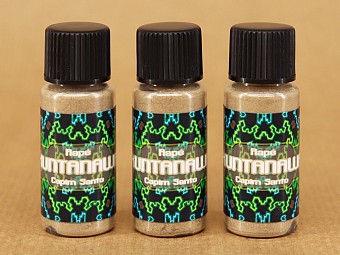 (Batch #8181) Kuntanawa Caipim Santo bestows a lasting cerebral effect upon the user. When partaking in smaller doses the effect could be considered similar to gentle streaks of lightning flickering across the frontal lobes. With larger doses the effect is likened to a tropical breeze sweeping across an inner citrus garden, delivering the adept into a minor trance. More information can be read below. 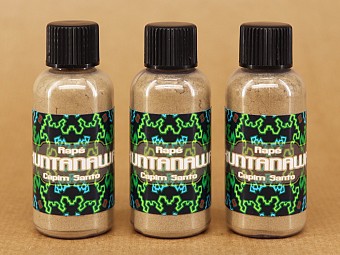 Capim Santo from the Kuntanawa tribe contains Lemongrass as an ingredient and bestows a lasting cerebral effect upon the user. When partaking in smaller doses the effect could be considered similar to gentle streaks of lightning flickering across the frontal lobes. With larger doses the effect is likened to a tropical breeze sweeping across an inner citrus garden, delivering the adept into a minor trance. Be prepared for moderate internal atmospheric changes and a strong citrus sensation rising to the crown of the head. Capim Santo has a pleasant afterglow, minimal pleghm to the throat and is perfect for beginners and regular users as it leaves the user with a fresh and clearing sensation in the sinuses and head.

Aside organically grown Tabaco and ashes, this Rapé contains Lemongrass (Capim Santo), a herb commonly used and well known as a pleasant aromatic tea calming the nerves and giving a general feeling of well being. Very refreshing!

This is an extremely fine and dry powder. It takes great effort to produce such a fine powder at a 150 micron fineness. This is our standard. All our products are processed to a high standard and consistent fineness and dryness, using laboratory grade sieves and dehydrating equipment, before packaging.