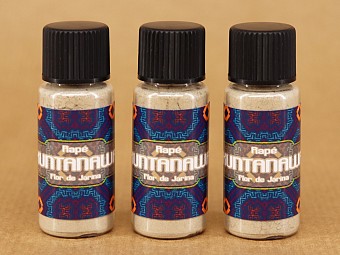 (New Batch #7723) A popular, powerful and flowery Rapé from the Kuntanawá tribe. Very cleansing and forcefully grounding. Ideal for balancing energies and obtaining peace of mind. Flor de Jarina is a much appreciated Rapé among the Kuntanawa's; they say that the Jarina flowers make them invisible to enemies, spiritual and physical ones, and the flowers keep the enemies far away. More information can be read below. 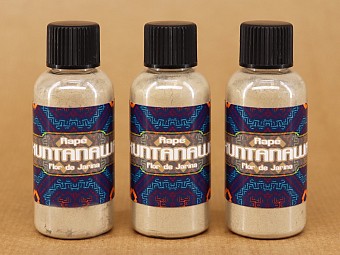 A classic. Flor de Jarina is a much appreciated Rapé among the Kuntanawa's; they say that the Jarina flowers make them invisible to enemies, spiritual and physical ones, and the flowers keep the enemies far away.

This a very fine powder with its own colour variation. Extremely powerful and sometimes overwhelming, with strong forest flower flavours. Even in low doses, as soon as the Rapé hits the nose the user feels a widening of the nostrils and water wells into the eyes instantly. As well as the initial strong effect, the Rapé also has strong after effects that lasts sometimes for up to a few minutes or more. The tendency to purge from Flor de Jarina is minimal and the effects keep to the upper area of the body mainly around the head. The duration of the powerful after effects have been known to last a few minutes before grounding resumes. To be taken in a comfortable setting as this powerful medicine will take a moment or so before returning to one’s stability. Origin: Brazil, Acre.

This is an extremely fine and dry powder. It takes great effort to produce such a fine powder at a 150 micron fineness. This is our standard because this provides the best Rapé experience. All our products are processed to a high standard and consistent fineness and dryness, using laboratory grade sieves and dehydrating equipment.