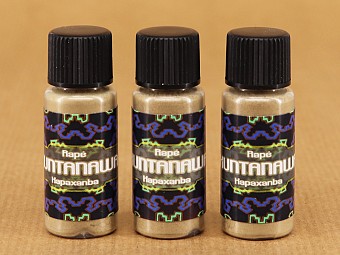 (Batch #3024) Kapaxanba Rapé is prepared with Tabaco and ashes of Sapota. The special character of this Rapé comes from the herb Lourinho that gives it a pleasant fresh smell. Another local herb from the region used in this particular blend is Kapaxanba, also known as Samsara, that is great for headaches and has a very particular delicious smell. This exclusive Rapé is very aromatic, yet forcefully cleansing and liberating. With any size of dose, sneezing is likely to occur. More information below.

Prices below have been reduced by 15% for a limited time. 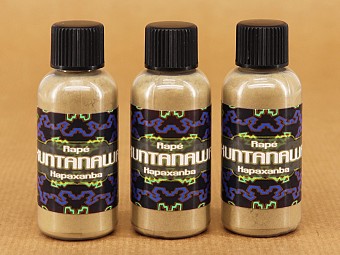 Kapaxanba Rapé has been prepared by a member of the Kuntanawa tribe, who lives on the Jurua river close to the Peruvian border, on the river Tejos, a side river from the Jurua. This Rapé is prepared with a base of local organically grown Tabaco and ashes of Sapota, and Kapaxanba and Lourinho herbs. Sapota ash is a very little known ash, specific to the region. It is very gentle on the nose. Wonderful for the regular meditator for not clogging the nasal passages. The special character of this Rapé comes from the herb Lourinho that gives it a pleasant fresh smell. Lourinho is a plant used for spiritual cleansing, not only in Rapé but also in other medicinal and spiritual preparations. Apart from this it is very refreshing on the nasal passage, opening them up and easing breathing. Another local herb from the region used in this particular blend is Kapaxanba, also known as Samsara, that is great for headaches and has a very particular delicious smell.

This exclusive Rapé is very aromatic, yet forcefully cleansing and liberating. With any size of dose, sneezing is likely to occur, which seems to be one of the main reasons that the head is cleared of the build up of negative energies, literally blasting out anything that has clogged the internal system. A light and meditative feeling can be experienced afterwards if time is taken to really feel it through. A great start to any shamanic ceremony one may be attending.

This is another genuine tribal Rapé from our close friend who lives in Brazil and is exchanging with the tribes people.

Like the Nukini, the Kuntanawa tribe became almost extinct due to the massacres of the latex cycle. One single family was left after the rubber boom and only since the beginning in 2000 a small group of Kuntanawa started to claim their indigenous heritage (Pantoja et al. 2014; Labate et al. 2014). Unfortunately, their culture is still under threat and the Kuntanawa are still struggling to regain full ethnic recognition and they are trying to regain their territory. Nowadays, there are only about 250 members left that are scattered throughout the region of Acre, Brazil. In order to survive, the Kuntanawa are joining other Pano linguistic tribes and they are organizing festivals together to share their traditions, their rituals, and their culture with foreign visitors. This small Pano linguistic tribe strongly values the ritualistic use of Ayahuasca to teach them and to guide them. The Kuntanawa even hold a strong believe that Ayahuasca will unravel their ancient knowledge and bring back their partly lost traditions (Pantoja et al. 2014). However, their language seems to be irrecoverably lost (Labate et al. 2014).

Kapaxanba Rapé is a base of local organically grown Tabaco and ashes of Sapota, and the herbs Kapaxanba (also called Samsara) and Lourinho.

Sapota is a very special and rare ash that comes from the upper Jurua region from the Kuntanawa people. The Sapota tree is referred to as a mother tree that provides food and medicine. The fruits and inner bark are eaten. The fruit is quite delicious. It is considered a medicine that firms the spirit and gives strength. The Capelao monkeys sing in these trees in the late night waking and calling all the beings of the forest. A little known ash that gives strength to the Rapé and makes it particular good for meditation. It is fairly gentle on the nasal passages and can be perceived when using more than once in a day as clogging the channels a lot a less than other types of ash. Since the tree gives food and feeds the people it is considered a nutritious medicine even in ash form.