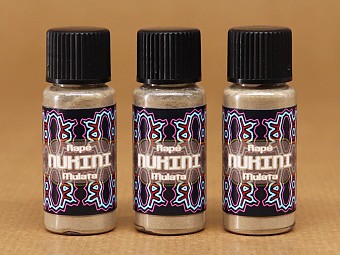 (New Batch #2133) This strong Rapé is made with Moy Tabaco, Parika ashes, and a herb called Mulatinha. This herb helps to calm the nerves, and relax in general. So we have a power Rapé with a nerve calming quality, good for strong deep meditation and concentration. This preparation offers a fine, sweet and extremely rounded experience, with a high frequency scent of jungle flowers. More information below. 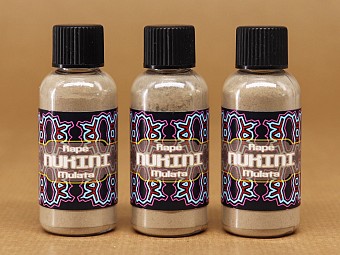 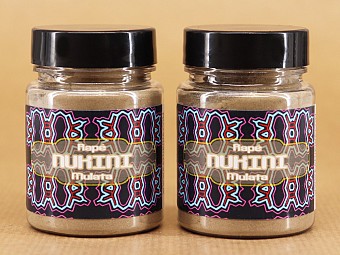 Note that this is a new batch and can vary slightly from the previous batch.

The Nukini, like most of the tribes in the state Acre, are from the Pano linguistic root. They live close to the border of Peru in the Jurua region, close to the Serra do Divisor (Dividing Mountain) national park to be exact.

This Rapé is made with a mix of mainly a very strong type of Tabaco together with the local organic Moy Tabacco, giving a very strong Rapé with the meditative quality of the local Moy. The maker has used Parika ashes, another ingredient that gives power and strength to this deep blend. Apart from the Tabaco and the ashes there is in each type a special herbal medicines typical from the Nukini. This Rapé is made with a herb called Mulatinha. This herb helps to calm the nerves, and relax in general. Mothers sometimes use it as a tea to calm little children when they are very agitated. So we have a power Rapé with a nerve calming quality good for strong deep meditation and concentration, a great Rapé to sit on the veranda, take a good blow and contemplate existence or meditate on whatever is needed at the moment, as this is the kind of use that this particular Rapé connoisseur of the Nukini people like when taking his afternoon medication.

This preparation offers a fine, sweet and extremely rounded experience, with a high frequency scent of jungle flowers. Fairly comfortable at low doses, yet at large doses ones warrior energies are released providing a strong base from which to stand in ones power. Best used in the later part of the day. Some phlegm can occur as well as residue reaching the back of the throat. After removal by blowing the nose, the user has a heightened sense of awareness and a sensation of regained physical and mental power.

This powerful Rapé comes from the Nukini tribe that lives in Acre, Brazil and belongs to the Pano linguistic family. The Nukini tribe compromises nowadays only about 750 members, as they suffered severely during the latex circle and afterwards, where many of the tribe members were enslaved or massacred. A huge part of their culture, including their language was consecutively lost or scattered and almost the entire ethnic group disappeared (Aguiar 2012). Yet, the Nukini managed to survive by mingling with other ethnic groups and tribes; they even rebuilt a strong socio-economic structure that enables them to be in close connection with the nature that surrounds and feeds them. Moreover, opposing many traditional Amazonian tribes, the Nukini value the female tribe members for their plant knowledge and let them gather and blend Rapé plants.

More on the Nukini

This Rapé is made with a strong (unnamed) Rustica Tabaco, mixed with Moy Tabaco and Parika. Parika is the ingredient that gives power and strength to this deep blend. Apart from the Tabaco and the ashes, a herb called Mulatinha is added. This herb helps to calm the nerves, and to relax in general.

This is an extremely fine and dry powder. It takes great effort to produce such a fine powder at a 125 micron fineness. This is our standard. All our products are processed to a high standard and consistent fineness and dryness, using laboratory grade sieves and dehydrating equipment, before packaging.

de Aguiar MS (2012). Nukiní: the Language and the Self-Esteem of a People. Proceedings published: kellogg.nd.edu/STLILLA