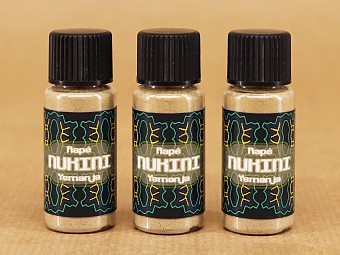 (New batch #1953) Nukini Yemanja. A beautiful powerful Rapé from the Nukini Rapé masters bring the force of their Rapé blended with the softness of white roses. Another masterful Rapé that brings the power of the feminine in this mystery of the sacred Tabaco. This Rapé is crafted with Tabaco de Corda, Tsunu and white roses. After studying the medicines, the right lunar position and so on they made a just beautiful medicine. Almost silky in texture and smelling friendly. Yet, the sting is surprisingly intense and gentle at the same time. More information below. 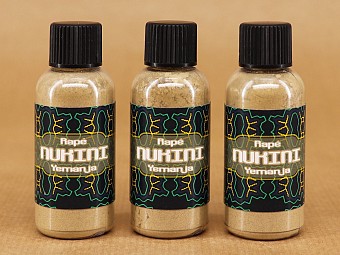 New stock! Note: As with all Rapè's, differences between batches are to be expected. For those used to this variety you will find this batch slightly different than you may be used to.

Nukini Yemanja. A beautiful powerful Rapé from the Nukini Rapé masters bring the force of their Rapé blended with the softness of white roses. A very particular blend that might sounds different but is an instant success. Another masterful Rapé that brings the power of the feminine in this mystery of the sacred Tabaco.

This Rapé is crafted with Tabaco de Corda, Tsunu and white roses. After studying the Rapé, the right lunar position and so on they made a just beautiful Rapé. It is a very fine light brown powder with no texture at all. Almost silky, and smelling friendly. Yet, the sting is surprisingly intense and gentle at the same time.

White roses are in Brazil considered good for spiritual cleansing and are used in flower baths for aura cleansing, they are considered related to the queen of the sea, the African goddess Yemanja, one more symbol of Brazilian cultural synchronism, where the indigenous spirituality meets the African, the mystery of the forest meets the sea! When you participate of many medicine circles in Brazil, even in de Amazon, even with indigenous people you be surprised at how many songs refer to the queen of the sea. Thousands of kilometers away from the coast, where most people have never seen the sea for real you will find them praising the queen of the sea and her mysteries. There even is a different stream of the Santo Daime religion that is called Barquinha, which means little boat, they are dedicated to the mysteries of the waters, principally the sea.

In the Yorubá language of West Africa all the names of the Orixás have a meaning, Yemanja literally means Mother of fish and she is considered the mother of most of Orixás and the mother of the waters, the supreme mother goddess. In the Brazilian synchronistic believe she is related to another earth mother, Mary in whose name we can also find back the root Mar or Mer, which as most people know is the Latin word or root for sea. Here we encounter the ancient mystical understanding of the feminine life giving force of the sea from whose proverbial womb, as also the scientists agree, all life sprung. In Brazil from north to south and east to west Yemanja is the most celebrated and adored symbol of the feminine, the manifestation of the goddess, Mother Nature and the mystical rose.

This Rapé is an extremely fine and dry powder. It takes great effort to produce such a fine powder at a 150 micron fineness. This is our standard because this provides the best Rapé experience. All our Rapé is processed to a high standard and consistent fineness and dryness, using laboratory grade sieves and dehydrating equipment, before packaging.

Customer feedback:
"..."Sacred Prayer Powder," is how I'd love to call this very special Rapé. During my ceremonies with Nukini Yemanja, it was as if this special, Sacred Prayer Powder amplified my spontaneous prayers. And at times, it felt as if the powder itself was a sacred prayer by itself, entering my being, my heart, my mind, assisting me in becoming a better version of myself, acknowledging the light within. Not only during the ceremony but even more so afterward. This is my greatest teaching, to implement these prayers in daily life. It was the very first Rapé I ever received, at the end of a ceremony, and I was blown away by its gentle, powerful effects. I got three decent spoons in both nostrils and blew with a powerful breath. Wow. It felt as if my brain, my eyes,... were dismantled and re-assembled, re-aligned again. From a deep place within. Heartwarming. The effect was very physical and energetic and a bit overwhelming, yes, but not in a negative sense—no vomiting, no coughing,... or Rapé coming down into my throat. Even now, after two months, it feels as it was yesterday. I waited a bit to write my review because now (1) I can take some distance from my experiences, (2) I will remember the essential aspects and (3) I have more a sense of what it means for my daily life - I've been connecting with this Rapé for 2 months now. Sacred Prayer Powder it is! After my initial first Rapé session with Nukini Yemanja, which I received from an experienced practitioner, I felt guided to buy it myself and commit to a 21-day diet with Mapacho, this sacred prayer & Sananga (medium). I did not self-administer every day a high dose though - sometimes only one small scoop per nostril, sometimes more, and only occasionally two or three moderate scoops. It was, at times, a challenge to keep the self-administration sacred - in the sense of not making a habit out of it. With a family and a child to care for, and my work, it was a matter to seize the moment/time/space whenever I could to this. Most of the time, I hold these mini-ceremonies in the late evening. I could easily fell asleep afterward. On the third or the fourth day, I felt as met the spirit of this special Rapé, in combination with Mapacho. It felt overwhelming as if another spirit was entering my being - a couple of minutes after self-administration. There was a moment of worry, as in 'what the F is happening', but this dissolved quickly in the vibrating softness of the heart, in trust, in surrendering to the flow. At times I started crying almost immediately when I held a ceremony because of the Rapé's holding field of softness: Its prayers opened a connection from my heart to suppressed feelings. I was able to get in touch with deep-rooted frustrations from myself and in connection with the collective consciousness field during these challenging times. It is hard to describe everything I went through - and this is not necessary. Thank you so much for sharing this wonderful gift and prayer medicine..."

The Nukini tribe can be found in Acre, Brazil and belongs to the Pano linguistic family. The Nukini tribe compromises nowadays only about 750 members, as they suffered severely during the latex circle and afterwards, where many of the tribe members were enslaved or massacred. A huge part of their culture, including their language was consecutively lost or scattered and almost the entire ethnic group disappeared (Aguiar 2012). Yet, the Nukini managed to survive by mingling with other ethnic groups and tribes; they even rebuilt a strong socio-economic structure that enables them to be in close connection with the nature that surrounds and feeds them. Moreover, opposing many traditional Amazonian tribes, the Nukini value the female tribe members for their plant knowledge and let them gather and blend Rapé plants.

More on the Nukini.