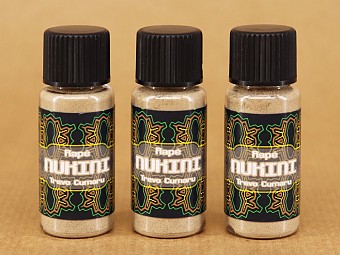 (New Batch #2511) A powerful Rapé from our favourite supplier in Brazil. Made with local dark Tabaco and Parika ashes, and Trevo Cumaru (Justicia pectoralis). Sometimes referred to as Chambá, The dried leaves contain compounds that produce a Vanilla-like smell. The Wajacas (shamans) refer to the leaves of the Justicia pectoralis as "Bolek-Bena" meaning "Leaves of the Angel of Death". More information below. 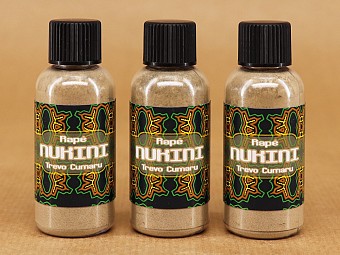 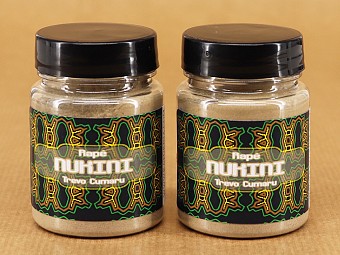 Note that this is a new batch and can vary slightly from the previous batch.

Powerful and highly praised. A Rapé from our favourite supplier in Brazil. This Rapé is made with mainly a very strong type of Tabaco but has also local organic Tabaco mixed in. It uses Parika ashes. Apart from the Tabaco and the ashes it is made with a herb called Trevo Cumaru, it is a herb that helps against cough, bronchitis, astma and respiratory problems in general. It is small herbal plant (not to be confused with Cumaru) that is used for ashes, or Cumaru de Cheiro, better known as Imburana (Amburana/ Emburana), both being big trees. Trevo Cumaru (Justicia pectoralis) a small herbaceous plant that is member of the Acanthaceae family. Sometimes referred to as Chambá, Trevo Cumaru is often used in Ayahuasca. Trevo Cumaru is noted for its smell which is pleasant for many people but can be unpleasant for others. The dried leaves contain compounds that produce a Vanilla aroma. It is commonly found in hallucinogenic snuffs (Virola) used by the indigenous tribes and is said to increase the absorption of other ingredients in the snuff. The Wajacas (shamans) refer to the leaves of the Justicia pectoralis var. stenophylla as "Bolek-Bena" meaning "Leaves of the Angel of Death." This is a wonderful strong Rapé. Great when one has respiratory problems or when one just feels clogged up.

This powerfully energising Nukini Rapé comes from the Nukini tribe that lives in Acre, Brazil and belongs to the Pano linguistic family. The Nukini tribe compromises nowadays only about 750 members, as they suffered severely during the latex circle and afterwards, where many of the tribe members were enslaved or massacred. A huge part of their culture, including their language was consecutively lost or scattered and almost the entire ethnic group disappeared (Aguiar 2012). Yet, the Nukini managed to survive by mingling with other ethnic groups and tribes; they even rebuilt a strong socio-economic structure that enables them to be in close connection with the nature that surrounds and feeds them. Moreover, opposing many traditional Amazonian tribes, the Nukini value the female tribe members for their plant knowledge and let them gather and blend Rapé plants.

More on the Nukini

Strong and dark local Tabaco varieties and Parika ashes form the basis of this Rapé. Parika is the ingredient that gives power and strength to this deep blend. Trevo Cumaru (Justicia pectoralis) is a small herbaceous plant that is member of the Acanthaceae family. Sometimes referred to as Chambá, Trevo Cumaru is often used in Ayahuasca.

De Aguiar MS (2012). Nukiní: the Language and the Self-Esteem of a People. Proceedings published: kellogg.nd.edu/STLILLA