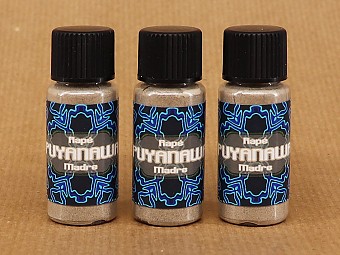 (New Batch #2520). A powerful Poyanawa Rapé made with Moi Tobacco, Pixuri leaves and ashes from a special mature wild "Mother" vine. It is the ashes from this special vine from the forest that gives the power to this blend. Instead of a hard initial hit, its power seeps into ones being gently, bringing a calmness, a relaxation and letting go in the body and mind, spaciousness and a deep persisting sense of comfort and stillness. This Rapè would not only lend itself to meditation and contemplation but due to the low body load, would be fantastic when on the move. More information below. 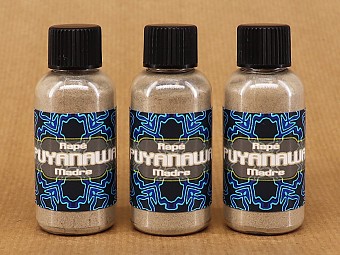 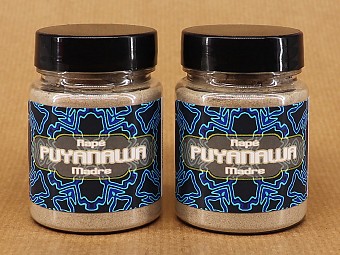 A powerful Poyanawa Rapé made with Moi Tobacco, Pixuri leaves and ashes from a special mature wild "Mother" vine. It is the ashes from this special vine from the forest that gives the power to this blend. The Pixuri leaves are added for scent and for their medicinal and spiritual character. This is a typically "brown" Rapé, however it has a similar sharpness as the greyer types.

This Rapè is a deep full brown colour and its aroma is divine, super fresh and tantalises the olfactory senses, lifting one's spirit just from its fragrance alone. Its initial effect on the sinuses is gentle, not at all harsh due to the greatly reduced ash content, whilst the Pixuri leaves bring a fantastic freshness to the experience. Instead of a hard initial hit, its power seeps into ones being gently, bringing a calmness, a relaxation and letting go in the body and mind, spaciousness and a deep persisting sense of comfort and stillness. This Rapè would not only lend itself to meditation and contemplation but due to the low body load, would be fantastic when on the move. If one thinks to prefer the grey varieties, trying this may change one's mind.

This Rapé was made by one of their medicine men, named Iraqi. A man respected within the community for his knowledge of medicines and a holder of their tradition.

The Poyanawa like to use their local organically grown ingredients. They keep their blends more on the Tobacco side and use quite little ashes compared to other tribes. This is something we see with some more secluded tribes that like to use the natural Moi Tobacco that in general is milder than some of the powerful Corda Tobacco types but by its energy it is very pleasant and has a great character and taste.

The recipe for this Rapè includes the ashes of the Jagube or Mariri as they locally call the vine and was first made by their people and conceived by their chief and passed on to Iraqi for safe keeping and developing. For more information about Puyanawa medicine look at the description of the Poyanawa Pixuri.

This is an extremely fine powder, creamy to the touch. It takes great effort to produce such a fine powder, entirely void of stems, veins, grains and bits, and at a 150 micron fineness. This is our standard because this produces the best Rapé experience. All of our Rapé varieties, be it a genuinely tribal Rapé, Cinza (ashes), or tobacco powder, we process this to a high standard and consistent fineness, using laboratory grade sieves and milling equipment.

Customer report:
"...Indeed this blend is very soft and calming. Forming spirit in the middle pillar. Even after triple of the normal dose I could find nothing more to write than already in your description. I conclude this is a kind of mysterious blend..."

A powerful Poyanawa blend made with organic Moi Tabaco, ashes of a special jungle vine and some Pixuri leafs for flavour.