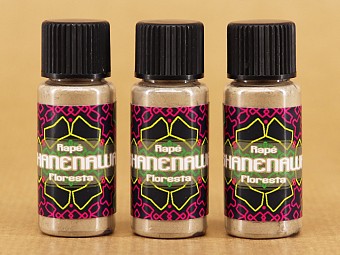 (Batch #7731) An amazingly sharp Rapé, causing an immediate buzzing pain, and watering eyes. An excellent array of aromas are experienced, sweet, rustic, spicey, almost flowery. Although it looks like a semi brown Rapé, its energy is much like a typical grey Rapé. A high frequency with rich notes and not too heavy on the Tabaco. More information below. 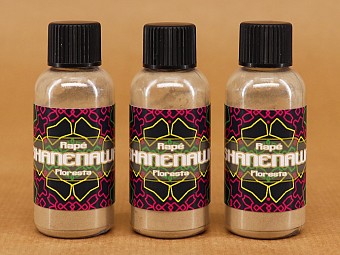 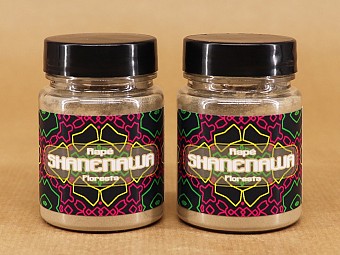 This Rapé smells sweet and friendly. Yet, it is amazingly sharp, causing an immediate buzzing pain, and watering eyes. An excellent array of aromas are experienced, sweet, rustic, spicey, almost flowery. The initial strong sting subsides quickly. After cleaning the nose a heightened feeling can be noticed and a greater visual and mental focus. Although it looks like a semi brown Rapé, its energy is much like a typical grey Rapé. A high frequency with rich notes and not too heavy on the tabaco. No information was provided as for what ingredients were used in this complex Rapé blend. Origin: Brazil, Acre.

This is an extremely fine and dry powder. It takes great effort to produce such a fine powder at a 125 micron fineness. This is our standard because this provides the best Rapé experience. All our products are processed to a high standard and consistent fineness and dryness, using laboratory grade sieves and dehydrating equipment, before packaging.

After three or four decades of persecutions and suffering caused by the violent occupation and exploration of Acre, a new period began, leaving little space for the small indigenous groups to take refuge. As the rubber economy developed, the Indians were allocated as the workforce to provide game meat and other food produce, before being integrated later by force into working in the rubber extraction areas and rubber tapping itself. The territory inhabited by the Shanenawa today was first occupied at the end of the 1950s and incorporated as a space where they pursued their subsistence activities and their social, political and cultural organisation.

The Shanenawa belief in the existence of forest spirits, the jusin, is very clearly apparent. These spirits are beyond nature and humans alike, making them supernatural and superhuman. There are good and bad "Jusin". The principal such entity is called Jusin Tsaka who, the Indians say, takes the form of a monstrous animal that destroys and burns everything as it passes by. The Shanenawa say that it is very common to find the footprints of Jusin Tsaka in the morning, since the spirit only ‘attacks’ at night. The adults use the figure of this Jusin to scare children and make them obey them. The Shanenawa consume Ayahuasca (called "umi" in their indigenous language), a drink based on a particular vine species and hallucinogenic leaves that induces visions. Through these visions, they communicate with the spirits of their ancestors and obtain help to solve their problems. Umi is also used as a medicine, since they believe that by ingesting it will make their body healthy. The Indians claim that the community does not possess a shaman. All the same, their herbal medicine is very rich and includes remedies for practically everything. They also use fauna for cures, the most sought being toad venom or vaccine. The Indians apply the substance, taken from a rare species of giant leaf frog, Phyllomedusa bicolor, to their arms at three points burnt with fire. In a few minutes, they vomit the entire contents of their stomach and thereby renew their strength and disposition to work. The toad venom is associated with the medicinal property of dispelling laziness and "panema", a term taken from the Nheengatu general language, which means a lack of fortune in hunting.

Still on the topics of traditional rituals, there are records of very interesting aspects. One of them is Mariri, a word taken from Nheengatu to designate a typical event among the Shanenawa and among other Pano populations. Mariri has no set date to take place, but it more commonly occurs in Acre’s summer, a period with little or no rain, spanning from April to September, thereby making it easier to walk around the villages due to the absence of mud. Any member of the group may take part in the dance as long as they rehearse the songs taught by their ancestors. For Mariri, the group’s members paint themselves with Annatto and Genipap and wear a dress made from strips of tree bark. During the Mariri periods, many other events are registered such as the act of masquerading as Jusin Tsaka, which the Indians interpret as ‘werewolf.’ Generally, one of the men is covered in tree branches and banana leaves and enters in the middle of the dancers, frightening everyone.