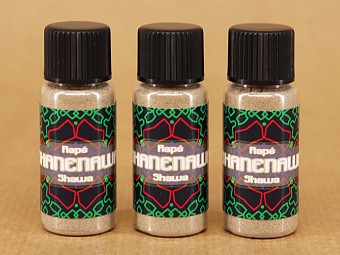 (Batch #3024) This unique tribal Rapè is from the Shanenawa tribe. It contains a herb called Shina Shawa, Mapu Kuma tree ash and tobacco de Corda. It is a darker grey Rapè that gives a moderate initial hit, some element of hotness that leaves a peppery afterglow in the sinuses. The experience is clearheaded and not too heavy. Larger doses cause immediate eye watering and keep the user stationary but do not overload the users balance or make the user too wobbly. This Rapè is said to be directed mainly towards the illness of the body. More information can be found below. 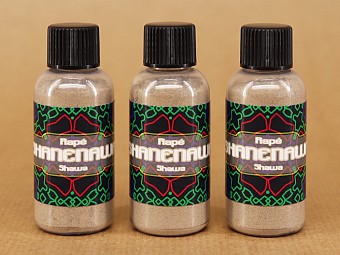 This unique tribal Rapè "Shanenawa Shina Shawa" is from the Shanenawa tribe and from municipality of Feijo, Acre, Brazil. It contains a herb called Shina Shawa, Mapu Kuma tree ash and tobacco de Corda. It is a darker grey Rapè that gives a moderate initial hit, some element of hotness that leaves a peppery afterglow in the sinus somewhat akin to Parika. The experience is clearheaded and not too heavy. Larger doses cause immediate eye watering and keep the user stationary but do not overload the users balance or make the user too wobbly.

This Rapè is said to be directed mainly towards the illness of the body like headache, flu, sinusitis, insomnia etc.  We would love to hear more feedback from users regarding this. It was prepared by the medicine group of the village that dedicates themselves to the practise of traditional healing of their culture. The group is lead by the wife of the chief of the village. They made the Rapè in a shelter in the jungle prepared for this use so the men have their privacy, peace and concentration for their work. They grind the tobacco in a special Mortar made for that occasion. Just making that Mortar took them 3 days. The money made by making this Rapè are used for expanding the house of the chief of the village and to other needs of their community.

The Shanenawa belief in the existence of forest spirits, the jusin, is very clearly apparent. These spirits are beyond nature and humans alike, making them supernatural and superhuman. There are good and bad jusin. The principal such entity is called jusin tsaka who, the Indians say, takes the form of a monstrous animal that destroys and burns everything as it passes by. The Shanenawa say that it is very common to find the footprints of jusin tsaka in the morning, since the spirit only ‘attacks’ at night. The adults use the figure of this jusin to scare children and make them obey them. The Shanenawa consume ayahuasca (called umi in their indigenous language), a drink based on a particular vine species and hallucinogenic leaves that induces visions. Through these visions, they communicate with the spirits of their ancestors and obtain help to solve their problems. Umi is also used as a medicine, since they believe that by ingesting it will make their body healthy. The Indians claim that the community does not possess a shaman. All the same, their herbal medicine is very rich and includes remedies for practically everything. They also use fauna for cures, the most sought being toad venom or vaccine. The Indians apply the substance, taken from a rare species of giant leaf frog, Phyllomedusa bicolor, to their arms at three points burnt with fire. In a few minutes, they vomit the entire contents of their stomach and thereby renew their strength and disposition to work. The toad venom is associated with the medicinal property of dispelling laziness and panema, a term taken from the Nheengatu general language, which means a lack of fortune in hunting.