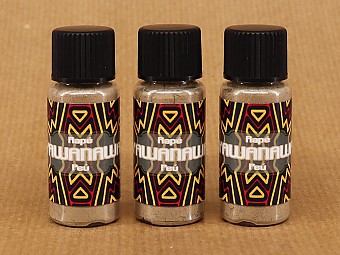 New batch (#9243). This Rapé is the basic Yawanawá Rapé made with Corda Tabaco and Tsunu ashes. It is for us the perfect blend of ashes and Tabaco, non fragrant or spicy and 'clean' in its flavour due to the ash content. It's initial effects upon application are a powerful yet contained explosion in the sinuses and being of the user. Strong! This quickly dissipates, immediate eye watering follows and then a persistent calming of thoughts and awareness of the body becomes prominent. Little to no Rapè is transported to the back of the throat. More information can be found below.

New Batch. A new batch may vary in effect, flavour and consistency from the previous batches.

This Rapé has an immediate "kick". It is named after the producer. This Rapé is the basic Yawanawá recipe made with Corda Tabaco and Tsunu ashes. It is for us the perfect blend of ashes and Tabaco, non fragrant or spicy and 'clean' in its flavour due to the ash content. It packs a punch. It's initial effects upon application are a powerful yet contained explosion in the sinuses and being of the user. Strong! This quickly dissipates, immediate eye watering follows and then a persistent calming of thoughts and awareness of the body becomes prominent. Little to no Rapè is transported to the back of the throat. This Rapè takes one to the edge of feeling a little 'wobbly' but not fully into it (though may do so with larger doses), holding you perfectly in place in your body and calm in your mind. This Rapè is simplicity perfected, really well balanced and a solid choice to have in ones collection.

This traditional Rapé has been made by a youngster from the village Nova Esperança, New Hope. New Hope is where the Yawanawá started their new phase of reclaiming their culture. When they got rid of the rubber tappers and missionaries they left their old village and moved to this place for a fresh start, that´s why they named it New Hope. Peú, as he is called is a young man very dedicated to his culture and the study of their spirituality. He spend three years straight on a diet, normally people do about a year when they do the bigger diets, which is already plenty. This means the first 3 to 6 months they stay secluded in the forest only having contact with the older Shaman who is initiating them and a few others who take care of them. Under a diet such as this, the world can end, loved ones can pass away but they will know nothing, as they stay fully disconnected from the world. During the diet there are many things that cannot be eaten, like sugar or any sweet things like most fruits, even water cannot be drunk because it is considered sweet. Also no salt, no sexual relations and some other restrictions. For a young man to keep this up for 3 years shows dedication! This experience and knowledge reflects in his medicine, although he stopped the diet and got married this is something that changes the person forever. This Rapé is a truly wonderful medicine considered by many connoisseurs who know him and his Rapé, a favourite!

A report from one of our customers:

"...A fast and sharp effect, with high ash and Tabaco content, this Rapé is great for low to mid dosages. After the initial purging, it brings a feeling of tranquility with a smooth air of self-awareness..."

The Yawanawá were the first tribe that initiated a woman to become a shaman, setting a huge example in the history of shamans. In their language Rapé is called Rume and the Yawanawá preferably blend Rume with Tsunu ashes and mapacho, which gives this special blend a very refined taste. In addition, Tsunu is used for healing purposes and has a supportive role during ayahuasca ceremonies. Mostly, the Tsunu is used before ayahuasca, enhancing the effects and opening the spirit for the ceremony, but it is also applied during intense ceremonial experiences, easing the vomiting and cleansing.

More information on the Yawanawa