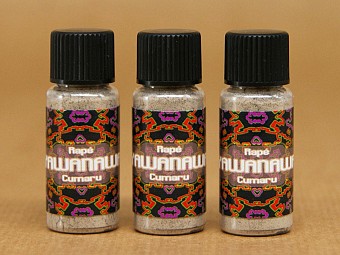 Restock expected! A deeply intense and strong dark Rapé containing Cumaru ashes. Cumaru is extremely grounding and has the ability to put the user into deep trance like states. It easily makes it way into the back of the throat and in some occasions can cause detoxification. This s a famous Rapé made from traditional ingredients obtained from the Yawanawá and made by a magician who understands the respect and honor needed to work with these plant spirits. More information below.

A deeply intense and strong dark Yawanawá style Rapé containing Tobacco and Tonka Bean Tree (Cumaru) ashes. Yawanawá Cumaru is extremely grounding and has the ability to put the user into deep trance like states. It easily makes it way into the back of the throat, and in some occasions can cause deep nausea and detoxification. As with the Canela De Velho, purging is quite possible and the aftertaste although quite pleasant is extremely strong and can cause a continuous stream of phlegm in the throat. Intention and setting have an important role in the administration of this Rapé and one should take time and space to prepare for its effects.

This is a new Rapé made from traditional ingredients obtained from the Yawanawá, but mixed and charged with powers in a new post shamanic fashion by a magician who understands the respect and honour needed to work with these plant spirits.

This is an extremely fine and dry powder. It takes great effort to produce such a fine powder at a 125 micron fineness. This is our standard. All our products are processed to a high standard and consistent fineness and dryness, using laboratory grade seives and dehydrating equipment, before packaging.

"...As always I started by smelling this Rapé with my eyes closed. The scent, woody and spicy, reminded me of the Yawanawa Canela do Velho, yet not as aggressive and much deeper. If it would be a colour, it would be a dark red, tannic, almost brown. The first dose I blew was the size of a pea. After the initial kick, which was very grounding and much less violent than the smell would suggest, the sensation radiated through my entire body, and after only seconds I could feel its presence all the way down to my feet. Then it began an intense work in the stomach, and made gently its way to my head. This connection between stomach and mind is the most distinctive property I could give to this Rapé: by releasing the spirit of some intellectual processes of the mind, it allowed me to access emotional roots through other, more direct ways. The travel was one to warm and humid caverns where some powerful magic dialogs with ancient memories (or maybe future ones) without using any words or codified language. This is not a Rapé to take casually. This is one that invites to a profound and slow meditation..."

"Great experience with this rape ,perfect finding a special place on the beach or countryside , big connection with yourself and clarity taking out junk thoughts getting pure presence.  Caution for beginners with this rape"

The Yawanawá, or the tribe of the white-lipped peccary, are a small tribe of 1,300 people, living remotely in only a few villages along the Gregório River. They are known as warriors, as they always keep on fighting, even in hard times. At some point in history their tribe was almost extinct, with only about 300 members left. Nowadays their tribe has grown again, and their traditions and knowledge have been conserved in a very strict way. The Yawanawá were the first tribe that initiated a woman to become a shaman, setting a huge example in the history of shamans. In their language rapé is called Rume and the Yawanawá preferably blend Rume with Tsunu ashes and mapacho, which gives this special blend a very refined taste. In addition, Tsunu is used for healing purposes and has a supportive role during ayahuasca ceremonies.

Apart from containing Brazilian Tobacco this rapé has ashes from Cumaru bark (Dipteryx odorata). Cumaru is also known as the Tonka bean tree and has a long tradition of being used as a flavorful ingredient in snuffs, sweets, and foods. Yet, Cumaru also contains several bioactive ingredients, including coumarins and triterpenoids, and studies have proven its potential as a naturally occurring cancer chemopreventive agent.