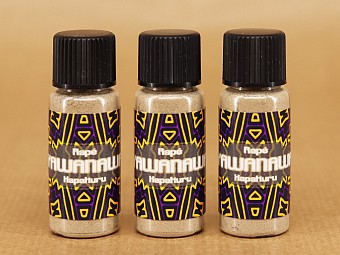 (New batch #5112). This Yawanawa Rapé is named after its creator. Kapakuru is a member of the Aldeia (village) of Nova Esperanza in the Yawanawà tribal lands where he works as a school teacher. Kapakuru follows the basic Yawanawà recipe of Tabaco and ashes made from the bark of the Tsunu tree. This fine Rapé can be considered reasonably powerful and has strong expelling properties. in some cases sneezing can be expected. More information can be found below. 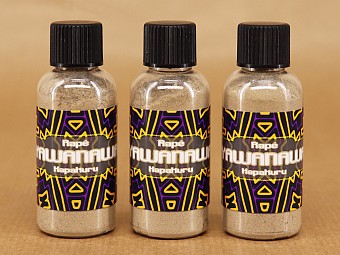 Note: As with all Rapè, differences between batches are to be expected, for those used to this variety you will find this batch slightly different than you may be used to.

This Yawanawa Rape is named after its creator. Kapakuru is a member of the Aldeia (village) of Nova Esperanza in the Yawanawà tribal lands where he works as a school teacher teaching traditional language to the younger generations. A very important issue for maintaining their culture. Many tribes have lost their original language and with it an important part of their identity. In their village, Kapakuru is very much respected and liked for his powerful Rapé, as well as his force when blowing the medicine. Applying a good Rapé admistration is considered a science and the effect can depend a lot on the intention and mental state of the person who blows it. It is the vital energy of the other you receive. In the tribes, most people, especially the elder, don’t let just any person apply Rapé to them. It has to be an elder or respected Shaman. Kapakuru follows the basic Yawanawà recipe of Tabaco and ashes made from the bark of the Tsunu tree. This fine powdered blend can be considered reasonably powerful and has strong expelling properties. in some cases sneezing can be expected. Minimal powder lodges in the throat and after removal leaves the user clear and free of blockages.

This is an extremely fine powder, creamy to the touch. It takes great effort to produce such a fine powder, entirely void of stems, veins, grains and bits, and at a 150 micron fineness. This is our standard because this provides the best Rapé experience. All of our Rapé varieties are processed to a high standard and a consistent fineness, using laboratory grade sieves and milling equipment.

The Yawanawá were the first tribe that initiated a woman to become a shaman, setting a huge example in the history of shamans. In their language rapé is called Rume and the Yawanawá preferably blend Rume with Tsunu ashes and mapacho, which gives this special blend a very refined taste. In addition, Tsunu is used for healing purposes and has a supportive role during ayahuasca ceremonies.