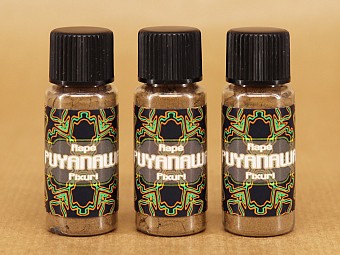 (Batch #8172) This new blend from the Puyanawa tribe uses Corda Tabaco and Murici ashes combined with a herb called Pixuri giving it a pleasent scent and a special character. The initial effects are mild and warming progressively building to a intense burning sensation. Lots of sneezing can be expected, expulsion of mucus as well as itching and tickling of the nose. Afterwards a calm state and mental clarity surrounds the user and the nose feels clear of debri. Very opening for the sinuses and leaves the user with the ability to breath deep fresh air. More information below. 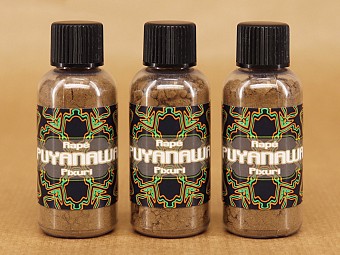 This new blend from the Puyanawa tribe uses Corda Tabaco and Murici ashes combined with a herb called Pixuri giving it a pleasent scent and a special character. The Puyanawa don´t make many different recipes but Pixuri is a classic of their culture and well worth trying. This Rapé is made by a Pajé, medicine man of the tribe. When asked about the uses of this medicine he told us that Rapé Pixuri is good for sinus problems, flu and headaches. When asked for more information, he said that it is a secret of his people. For the Rapé they use the leaves of the tree. The seeds of Pixuri are also used for their own particular medicines and it has uses as a flavor as well, but not in Rapè. When asked why they use Murici and not other ashes they say it becomes stronger like this and is better to pass. The initial effects are mild and warming progressively building to a intense burning sensation. Lots of sneezing can be expected, expulsion of mucus as well as itching and tickling of the nose. Afterwards a calm state and mental clarity surrounds the user and the nose feels clear of debri. Very opening for the sinuses and leaves the user with the ability to breath deep fresh air.

This is an extremely fine and dry powder. It takes great effort to produce such a fine powder at a 150 micron fineness. All the Rapé, Tabaco and ashes powders that we source, are refined to a consistent fineness and dryness, before packaging. We use laboratory grade sieves and dehydrating equipment to achieve a high quality product.