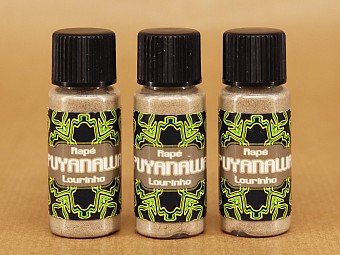 (Batch #2502) Puyanawa Rapé is made with organic Moy Tabaco from the Jurua Region, Parica ashes, and a herb called Lourinho. There is no info to be found about Lourinho, it is a local name that the forest people use. Its exact scientific name is unknown. Lourinho is a plant with a lush fragrance that opens the nasal passages, while refreshing the mind and clearing the spirit. It is used for spiritual cleansing by the indigenous people of the region. More information below.

Puyanawa Rapé is made with organic Moy Tabaco from the Jurua Region, Parica Ash and a herb called Lourinho. Parika is the ingredient that gives power and strength to this deep blend. There is no info to be found about Lourinho, it is a local name that the forest people use. Its exact scientific name is unknown. Lourinho is a plant with a lush fragrance that opens the nasal passages, while refreshing the mind and clearing the spirit. It is used for spiritual cleansing by the indigenous people of the region.

Organic Moy Tabaco from the Jurua Region, Parica Ash and a herb called Lourinho. This Rapé is processed into an extremely fine and dry powder. It takes great effort to produce such a fine and creamy powder at a 125 micron fineness. This is our standard. All our products are processed to a high standard and consistent fineness and dryness, using laboratory grade sieves and dehydrating equipment, before packaging.