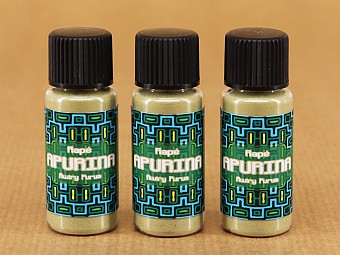 (Batch #3402) New! Apurina Awiry Purus has a flowery scent and literally smells like being in the middle of the jungle. Very opening and deeply subtle. Similar to the other Apurina blends, yet with a more flowery aftertaste. This Rapé serves as a mild yet intelligent tool for the beginner, or for those that prefer a Rapé that is mild in Tabaco, as it is a green leaf variety that is unfermented. It of course also blends well with Tabaco or Rapé or ashes, to create a personal and unique Rapé blend. More information can be read below. 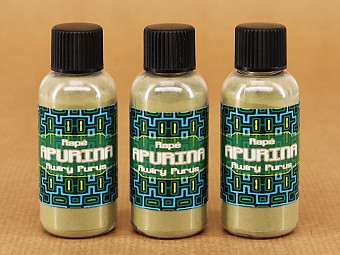 This green Rapé Apurina Awiry Purus produces a beautiful, yet sometimes mild effect, with the traditional green jungle overtones. The scents of the forest blend together to create one of the finest of Rapés. A deeply pleasant aroma with a fresh and heightened awareness. Apurina generally is made with Awiri, a special green Tabaco that grows wild along the rivers. Because it grows close to the river this Rapé can only be made in the dry season, and for that reason is quite rare and special. The Tabaco is not fermented nor heated to dry and grind it, so it is considered a raw, living Rapé.

Frequent users of the grey Rapé types will most likely find it "unnoticeable" in small quantities. Yet when used in a fresh state of awareness and with a clear channel the Apurina has an intense sharp slicing quality not unlike the Nunu from the Matses tribe. This Rapé has a more flowery scent and literally smells like being in the middle of the jungle. Very opening and deeply subtle. Similar to the other Apurina blends, yet with a more flowery aftertaste.

This Rapé serves as a mild yet intelligent tool for the beginner, or for those that prefer a wild fresh Tabaco Rapé. It of course also blends well with other Tabacos, Rapé or ashes, to create a personal and unique blend. This batch of Apurina is of an extremely fine powder. Origin: Brazil, Acre.

The Apurina make a unique Rapé that differs from most other Amazonian Rapés, as they do not use any ashes or fermented Tabaco in their mixtures. As the Apurina make their Rapé according to an old traditional recipe, they would not share the exact ingredients with us.

The Apurina tribe consists of approximately 2000 - 4000 members that are distributed over 27 indigenous territories in the Brazilian Amazon around the Purus River. Due to their migratory habits, the Apurina are spread over a large area, and it is hard to estimate precise numbers of their tribe. Every community in a given region of this big tribe has their own social organization. Yet, all Apurini people speak Maipure-Aruak and call themselves ‘Popingaré’ or ‘Kangite’, meaning ‘people’ or ‘humans’ (Facundes 1994). Female tribe members are skilled at making baskets, brooms, and pottery, and also beautiful snuff boxes off snail, metal, and rubber residues and the according rapé blow pipes.

Shamanism is an important part of the Apurina culture. The Apurina shamans work with stones, and heal with a special leaf that they chew – ‘katsoparu’ – and with a lot of snuff that the shaman and other tribe members consume and which they call ‘awire’. For the actual healing, the shaman sucks the illness out of the bodies, often visualized by stones that they extract from their sick bodies. Afterwards, the shaman inserts the stone in his own body and recommends different plant treatments. Another shamanistic way of treating sick people is by dreaming: the shaman’s spirit travels and carries out specific tasks, guided by other animal spirits and the chiefs of the animal spirits – which they consider themselves shamans. Often the shaman’s role is to guide these animal spirits, in order to prevent animals, like snakes or a jaguars from attacking. It is believed that a strong shaman never dies but becomes enchanted and continues his travelling.

More information on the Apurina