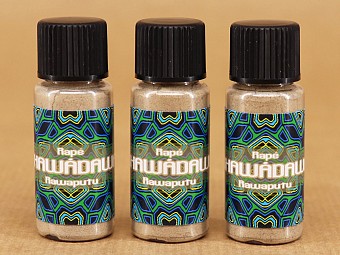 (New batch #5157) The Shawãdawa “People of the Macaw” prepare some of the most divine Rapé experienced. This amazing blend is of extremely high quality and frequency with mild subtle jungle tones and a sharpness which opens the temples of the head and helps to clear all negative emotions and lingering energies. The after effects are subtle but last for some time. We are blessed to have obtained this Rapé from the Shawãdawa. Deeply grounding into the now. More information below. 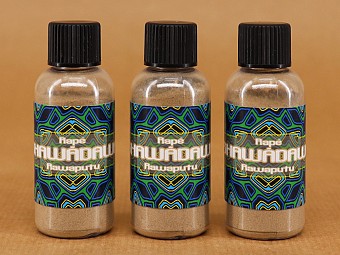 The Shawãdawa “People of the Macaw” prepare some of the most divine Rapé experienced. This amazing blend is of extremely high quality and frequency with mild subtle jungle tones and a sharpness which opens the temples of the head and helps to clear all negative emotions and lingering energies. The after effects are subtle but last for some time. Barely any noticeable phlegm is produced with mild doses, as being an extremely fine powder it almost completely absorbs into the nasal passages. We are blessed to have obtained this Rapé from the Shawãdawa. Deeply grounding into the now. Taking time out is advised. Preparation and relaxation afterwards is necessary to fully understand the experience.

This luxurious Rapé from the Shawadawa tribe has a deep earthly aroma with after tones of deep fermented Mapacho. The colour of Rawaputu is a creamy grey and the flow of the powder also has a wonderful creaminess to it. Immediately upon the first application the strength and power of this blend shows itself. Tears instantly begin to flow and it would be best at this moment to close the eyes and allow the full force of the effects to be felt. Attention to all distractions quickly fades as the second application is administered. The effects can be felt all the way to the back of the head and the sharp like clarity beam vaporises all focus upon anything but the immediate moment. As the focus beyond our immediate situation returns and the first thoughts arise, a calmness and serenity emerges from within. After removal of most of the phlegm and mucus some remnants in the back of the throat remain and for some time after the effects can still be felt. This fine blend from the Shawadawa definitely requires time and space to sit with it. Long lasting and powerful effects are to be expected. Some purging is also possible. A deeply healing variety from the Shawadawa tribe.

With great pleasure we are adding this new member to our family of tribes from Brazil: The Shawadawa, a tribe from the pano linguistic root, like families such as the Yawanawa, Poyanawa, Kaxinawa, Jaminawa, Deadawa, Kuntanawa and many others. Shawa means Arara, Macaw and Dawa means family so we are the family of the Macaw. The Arara is in the local indigenous tradition known as a messenger bird. The Shawadawa live around the upper Jurua river in four indigenous demarcated lands. Today the main objective of the Shawa people is to protect their lands and forests where all natural medicines are present. They are very driven to save, salvage and preserve their culture and the teachings of their ancestors. The use of sacred medicines brings them this study of healing and ancestral teachings.

The two new Rapés we offer from the Shawadawa, are made by a group of friends from the Shawadawa under the over seeing of Adeildo, one of the new generation members of his people who is very dedicated in saving what is left of the legacy, and is studying the language, traditions and medicines of his people. His mother, Dona Francisca is well known around Brazil as a herbal healer, a prayer and also a very respected traditional midwife having brought may in this world. Her mother recently passed away at a very respectable age of 114 years. Adeildo studies the plants in the tradition of his people but is also a long term member of the Santo Daime.

This Rapé was made under the power of the full moon with natural Tabaco, Tsunu ashes and two herbal medicines from Shawa traditional use, that are known as Rawaputu and Putuvi. These ingredients are herbal medicines against headaches, the flu, insomnia, mental disturbance and tiredness. It is used to give strength when working in the field, planting, fishing and hunting. This Rapé can be used in everyday use and it doesn’t require a special diet.

It takes great effort to produce such a fine powder at a 150 micron fineness. This is our standard because this produces the best Rapé experience. All our products are processed to a high standard and consistent fineness and dryness, using laboratory grade sieves and dehydrating equipment, before packaging.

The Macaws call themselves Shawadawa, which means the "people of the macaw". They belong to the Pano linguistic trunk and are located in the native arable land of the Humaitá stream, in the municipality of Porto Walter. After several territorial claims since 1980, its lands were demarcated with 87,571 hectares and is inserted in a mosaic of 23 (twenty-three) federal lands in the upper Juruá that make up a broad region rich in environmental diversity for the indigenous peoples who inhabit it.

The contact with the non-Indians was in the early twentieth century, at the time of the opening of a road lingering Cocameira, in the river Taraucá. According to the chief Zé Maria the population is about 650 people. Like the other indigenous peoples of the state of Acre, they also suffered from the "runnings" undertaken by bosses of the rubber company and many were forced to work with the extraction of the syringe. Indigenous peoples recognise this period as the period of "captivity", which lasted until the 1970s. During this period of slavery, what was most affected was the mother tongue, because they were forbidden to speak in their mother tongue, reflections to this day are still very strong.

Environmental
A huge environmental diversity is found in the forest, with an enormous amount of species, fauna and flora. The forest is preserved by the community. It has a variety of extractive potentials and today they are implanting a project of extraction of coconut oil for commercialisation.

Structural
They have built a school with a differentiated education system implemented; Health Center; Cooperative extractivist; Pole of extraction of implanted vegetable oils; Its construction are made of paxiuba, pillars of quariquara, maçaranduba and parrot and covered with straw of uricuri, jaci and buriti, as also some are covered with aluminum.

Education
They have a school with a differentiated education, which focuses on the revitalisation of culture, as a way of continuing the process of learning culture, being passed on knowledge from generation to generation; they are in the process of recovering the language and do not speak fluently the mother tongue; they use culture to learn the mother tongue using the traditional songs.

Threats
Cystic studies of the exploitation of petroleum near their land have been a cause for concern, considering that there is little information on the impacts that may occur; The influence of the Portuguese language on the mother tongue is a major threat to the indigenous peoples as a whole.