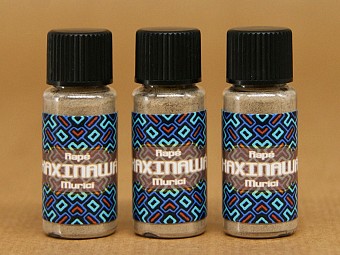 Expected stock. This blend of Rapé has a powerful strength to it, giving a very sharp and extremely clearing vibration. It contains ashes of the Murici tree (Byrsonima crassifolia), a traditional folk medicine plant, which is used in Rapé to clear energies that accumulate in the lower abdomen. Deeper and darker in appearance than most blends. It is advisable to take a moment out of time to administer. More information can be found below.

The Kaxinawa make some of the strongest Rape’s known. This blend contains ashes of the Murici tree (Byrsonima crassifolia). A traditional folk medicine plant, which is used in Rapé to clear energies that accumulate in the lower abdomen. Deeper and darker in appearance than most blends. It is advisable to take a moment out of time to administer. This blend of Rapé has a powerful strength to it, giving a very sharp and extremely clearing vibration. Barely any powder makes its way to the throat and being very fine, the powder tends to absorb directly into the vessels of the nose. Very calming after effects reside with a subtle pressure behind the eyes.

This Rapé is one of our classics. Made from ingredients obtained from the Kaxinawa, mixed and charged with powers in a new post shamanic fashion by a magician's student who understands the respect and honour needed to work with these plant spirits. Our dear magician friend was very well known for making some of the strongest of all Rapé's. Unfortunately our dear friend has passed away last year. His student is now producing the same varieties and therefore this batch is unique and carries a new energy with it.

"Kaxinawa Murici in my opinion is one of best I’ve tasted , so powerful but with a wonderful feeling peace and keeping me in here and now moment ,no hangover feeling in the morning."