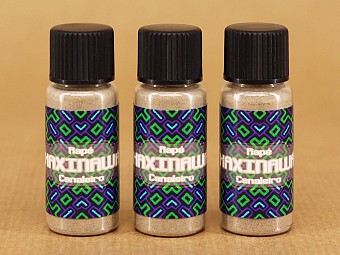 (Batch #6606). Another fantastic Rapè from the Kaxinawa. In appearance this Rapè is firmly on the darker side of grey, with an almost blackish grain. In scent one can detect spicy cinnamon tones, a quality of the Caneleiro leaves. Caneleiro bridges the gap between softer and heavier Rapè. The power of Caneleiro comes progressively, after about a minute you reach a state of intense relaxation and wellbeing. This blend is good for meditation, but taken in higher doses it can also induce purging and bringing cleansing to the body. More information below. 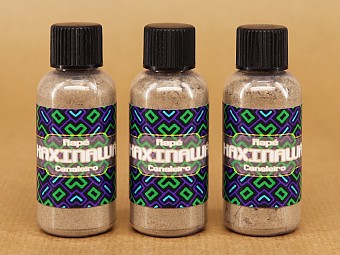 Another fantastic Rapé from the Kaxinawa tribe. In appearance this Rapé is firmly on the darker side of grey, with an almost blackish grain, similar to Canela de Velho, but with a slightly different taste, effect and character.  In scent one can detect spicy cinnamon tones, a quality of the Caneleiro leaves from which it gets its name.

The initial impact of this Rapé is akin to a fiery explosion in the sinus and consciousness of the user, this gently ebbs leaving a deep warmth in body and being.  As this initial fire ebbs away it is replaced with a grounding and solidity, the fire cleanses the earth and stillness reigns supreme. This Rapé leaves the user balanced physically and mentally calmed, receptive but still.

Caneleiro bridges the gap between softer and heavier Rapé. The power of Caneleiro comes progressively, after about a minute you reach a state of intense relaxation and wellbeing. This blend is good for meditation, but taken in higher doses it can also induce purging and bringing cleansing to the body.

More information about the Kaxinawa tribe can be read here.