Kaxinawa Tribe
The Kaxinawa tribe (Fig. 1) belongs to the Pano linguistic tribes that roam the border between eastern Peru and Western Brazil. Their villages are located around the rivers of Purus and Curanja in the Peruvian landscape. Brazilian tribes can be found close to the rivers of Tarauacá, Jordão, Breu, Muru, Envira, Humaitá and Purus. Nowadays, almost all of the tribes are interconnected. There used to be a time when the European explorers entered their territory in search for resources. One of these resources was latex or caoutchouc, which the foreign travelers soon started to harvest from the Amazonian forests. Due to deforestation and the invasion of their land, the indigenous people soon started to attack the invaders. Still, some of the tribes were eager to start exchanges with foreigners. Consequently, the tribes began to separate from each other more and more, and it was only until approaching the 20th century that they would come within reach of each other again.

The Kaxinawa people have a strong call for the spirit, which they call the „yuxin“. From their tradition only a true shaman can connect the spirit of the tribe with the spirit of the forest and thereby sustain a balanced communication between these two realities. In their beliefs, only a real shaman can protect the village. Yet, most of the indigenous people believe that there are no true shamans around anymore, while there are still a lot of apprentices to become initiated. To become a shaman, one has to go through a big transformation guided by the plant kingdom. At the end of their apprenticeship they will be strong enough to heal and kill without any use of plants, but by simply using their yuxin power. The use of ayahuasca in combination with special kinds of rapé snuffs is common in these rituals and initiations. The Kaxinawa people have a lot of feathery clothing and usually paint their whole bodies during ceremonies.

Kaxinawa means the bat people and is not used by the tribe itself, only by others. They call themselves huni kuin, which translates into „true human“. There are many tribes around that are related and usually are called “nawa”, like the tribes Yaminawa, Sharanawa, Mastanawa and more nawa.

The leader of the Kaxinawá and former vice-mayor of Jordan (Acre), Siâ Kaxinawá, is a wise and very respected shaman that vigorously stands up for his tribe in public and through organizations: he founded the União das Naçoes Indigenas (UNI/AC) and ASKARJ, and he is a cofounder of the Alliance of Forest Peoples and of the International Council on Human Rights (IACHR). These organizations are speaking for the rights of the indigenous communities, as well as for human rights and the protection of the rainforest (Aya Conference 2014, Ibiza). 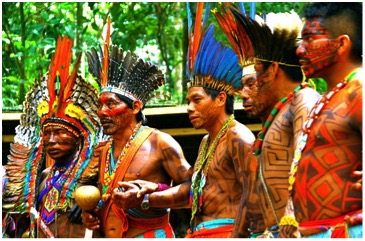