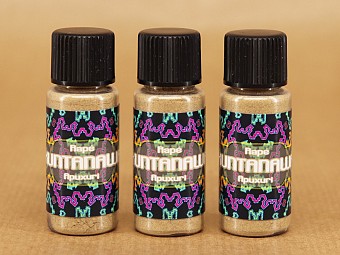 (New batch #1341) This Rapé gains it's special character from the local medicine called Apuxiri. Kuntanawá Apuxuri has a light sensual effect and unique flavor that hits you immediately. A clear, high and sharp initial feeling that seems to bring instant insight and a clear unchattered mind, to allow to fully concentrate on being in the moment. The flavour is quite acceptable and unique. Subtle after effects last for some time, and any background mind-activity is eliminated. Overall, a very balanced Rapè with its own essence and character. More information below. 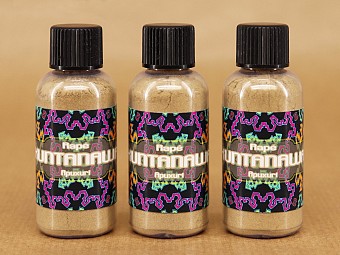 This is an exclusive Rapé of the Kuntanawa people. Made with with organic Moy Tabaco of the region, and ashes of the Sapota tree. This Rapé gains it's special character from the local medicine called Apuxuri. It has traditionally been used for many problems like fever, and general weakness, headaches and pain in the eyes. In Rapé it works good for headaches and pressure on the eyes, and as a general "pick me up". In the forest people also drink it as a tea, instead of coffee, just for its pleasant taste and its uplifting properties.

Kuntanawá Apuxuri has a light sensual effect and unique flavor that hits you immediately. The fine powder reaches complete absortion into one's centre, and a high vibration rapidly channels through. Apuxuri has a clear, high and sharp initial feeling that seems to bring instant insight and a clear unchattered mind, to fully concentrate on being in the moment. The ultrafine dust enters intensely and bits reaching the back of the throat is minimal and almost unnoticeable. Overall the flavour its quite exceptable and unique. Subtle after effects last for some time, and any background mind-intensity is eliminated. Overall, a very balanced Rapè with its own essence and character.

This is a new Rapé, made by our friends contacts in the jungle in Brazil. It is an extremely fine powder, and creamy to the touch. It takes great effort to produce such a fine powder, entirely void of stems, veins, grains and bits, and at a 125 micron fineness. This is our standard. All of our Rapé varieties are processed to a high standard and a consistent fineness, using laboratory grade seives and milling equipment.

Other names: Apuxuri, Kuntanawa, Being There