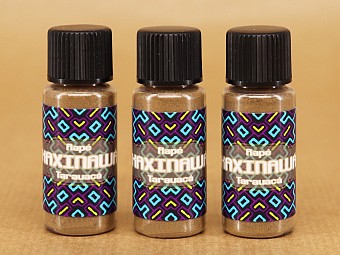 (Batch #8883) A new and very rare tribal Rapé from the Huni Kuin. The scent of this new Rape from the Kaxinawa (Huni kuin) is fantastic! Incredible deep chocolate and Tabaco tones and an almost menthol like freshness that widens the nostrils are immediately apparrent upon inspection. This Rapé imparts an initial hit on the sinus area but does not pentrate further into the head. The afterglow from using this Rapé is a deeply grounding, calming and contemplative experience with relatively little body load. More information can be found below.

A new and rare Rapé! Unique and one-off. A must-have for the collector and connoiseur of Rapé.

The scent of this new Rapé from the Kaxinawa (Huni kuin) is fantastic. Incredible deep Chocolate and Tabaco tones and an almost menthol like freshness that widens the nostrils are immediately apparrent upon inspection. Named after a river in Brazil "Tarauaca". It is a brown Rape. Unfortunately we have little information on its constituent parts but chocolate, Moi Tabaco, ashes and another unknown ingredient are suspected. It smells similar to the Kaxinawa Cacau Rapé but the flavour is deeper and fresher and the colour is darker. This is quite a special one, and we will not likely be able to obtain it again. Definately one for the connoisseur and collector of Rapé.

This Rapé imparts an initial hit on the sinuses, the nose and face area but does not pentrate further into the head. It comes more as a pleasant pulsation than a piercing 'hit', that ebbs within a minute or so. Welling from the eyes arrives alongside a relaxation in the body and a slowing and cessation of thoughts. Some phelgm production occurs though we find this is a delayed effect. The afterglow from using this Rapé is a deeply grounding, calming and contemplative experience with relatively little body load.

The Rapé maker is a paje (shaman) a son of the elder "paje" of the village. Money from this exchange goes towards the finishing of the medicine house of the village. The Kaxinawa tribe is the bigest tribe of Acre, with the most territories and area of teritorries. From which some territories (like Jordao) have over 30 Kaxinawa villages where over 3500 inhabitants of the Kaxinawa tribe live. Kaxinawas are known that apart of the traditional use of Rapé and Ayahuasca they also use Cannabis in their spiritual practice.

"...Kaxinawa Tarauaca. Dose: 2 small scoops. This Rapé has a significant penetrating smell with a sweet touch. The impact is particularly warm. Eyes started to tear immediately. The Rapé quickly finds his way to the throat, where also a warm haze remained, so I had a hard time not to purge. It seemed to be a very manageable Rapé, which does not really drop down, so it keeps vibrating at the top. The energy was bearable and easy to handle but there was something pretty intense, which made me feel that I was in a deeper process. My body got cold and I had an urge to massage and sense my body. When I thought that the energy was portable, I felt the need to go to the toilet, my lower abdomen began to work, I immediately went to sleep and the Rapé still worked deeply. I heard voices, saw images. A beautiful shamanic journey inside showed itself. Voices from the inside guiding me. Grateful for this beautiful blend, a special character that I can not quite bring home yet. More info about the plants and composition would be very welcome..."