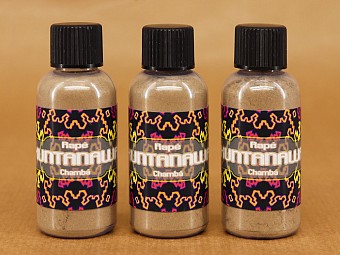 (Last restock of Batch #9918) This Rapé is similar to the Kuntanawa Força but has its own deeper tonality. The duration of the initial onset lasts just a few moments, yet a deep "in the clouds" effect may be lasting for some time afterwards. Clear positive affirmations and a calm space in which to take this Rapé are advised due to its mental and physical properties. Inexperienced users may find some nausea and physical discomfort. It's relaxing effect makes it a nice calm Rapé good for meditation and calming the spirit. More info below.

Chamba or Anador is a traditional herbal medicine used against many different pains, is has been used in teas and herbal baths by the tribal people of the region, it has been used in ceremonies as well. Apart from headaches and muscular pains it is considered good for bronchitis. It as well has a calming property and can be used against Insomnia, this relaxing effect reflects as well in the Rapé making it a nice calm Rapé good for meditation and calming the spirit.

This Rapé is similar in effects as the Kuntanawa Força but has its own deeper tonality. It has extremely powerful after effects, in small or large doses. The duration of the initial onset lasts just a few moments, yet a deep "in the clouds" effect may be lasting for some time afterwards. Clear positive affirmations and a calm space in which to take this Rapé are advised due to its mental and physical properties. As with most Rapé’s some powder tends to make its way into the throat, however this preparation causes little phlegm build up and the tendency to purge is minimal, but possible. Inexperienced users may find some nausea and physical discomfort.

This is a highly praised Rapé made from traditional ingredients obtained from the Kuntanawa, yet mixed in a new post shamanic fashion by a magician who understands the respect and honour needed to work with these plant spirits.

This is an extremely fine and dry powder. It takes great effort to produce such a fine powder at a 150 micron fineness. This is our standard. All our products are processed to a high standard and consistent fineness and dryness, using laboratory grade sieves and dehydrating equipment.

Organic Moy tobacco and Sapota ashes form the basis of this Rapé.