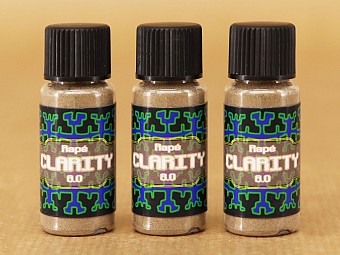 The new Clarity 8.0 is composed of Arapiraca, Moy and Mapacho Tabaco, Ashes of Cumaru, Canela de Velho, and Cacao. Several aromas from the Mint family and Cacao, are also part of this blend. During it's patient and time-consuming creation it was infused with the intention of reaching unlimited clarity of mind and full awareness of the present, giving rise to its name ‘Clarity’. This Rapé carries an ethereal sparkling fresh and pungent, yet earthy and grounding flavour that will leave a deep odour memory trace, and a uniquely sweet chocolate aftertaste. More information can be found below. 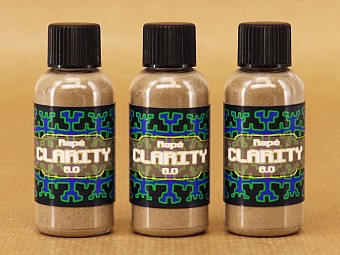 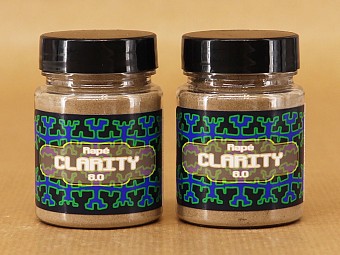 This unique and highly praised Rapé is called Clarity. A famous non-tribal Rapé. It is one of the most popular and sought after Rapé that we blended ourselves. The name Clarity dates back from 2012 when we first started experimenting and creating our own Rapé blends. This Rapé is part of the trinity, together with Orchid Fever and Pineal Flush.

The new batch Clarity 8.0 is again a masterpiece. The choice of Tabaco and ashes give this batch a very rounded and grounding feeling. We hope you will like this Rapé as much as we do.

The new Clarity 8.0 is composed of Arapiraca, Moy and Mapacho Tabaco, Ashes of Cumaru, Canela de Velho, and Cacao. Countless sacred and secret aromatic ingredients and essences, the most prominent of which are several aromas from the Mint family and Cacao, are also part of this blend. During it's patient and time-consuming creation it was infused with the intention of reaching unlimited clarity of mind and full awareness of the present, giving rise to its name ‘Clarity’. This Rapé carries an ethereal sparkling fresh and pungent, yet earthy and grounding flavour that will leave a deep odour memory trace, and a uniquely sweet chocolate aftertaste. It is strong and slicing on the inset and should be used with moderation, especially inexperienced people might find it painful and shocking at a large dose.

Although it is not a traditional Rapé from the Amazon, the name Clarity has left a strong trace of popularity. It has become in great demand by Rapé users and South American tribal people and shamans alike. Clarity is extremely strong and crystal clear, blowing the mind with absolute awareness and lucidity as if mind, body, and spirit become highly synchronised, enabling a completely new focus. Furthermore, due to the content of mint-like plants, Clarity supports clearing the sinuses and opening channels that bring about spiritual healing and cleansing.

Due to its potency, some users might experience a cold burning sensation, watering of the eyes, sneezing and mucus excretion. The pain of this cleansing process however passes quickly and the user is left with opened breathing channels and sinuses, and with an extremely clear focus and lucid mind.

The procedure of making this extraordinary blend is not by following numbers or a recipe. While using the same base ingredients, the finest aromas and tones are added by intuition and feeling in a patient process. This blend can never be exactly repeated and is unique in its frequency.

"...I would say that Clarity is an amazing Rapé. It's mild enough for beginners but interesting and complex and satisfying enough for those more experienced. Ice-cold and sharp in the beginning. Refreshing, uplifting, cobweb-clearing, resetting and delicious. It is a very fine powder and it hits deep in the nostrils without the nose running or dripping to the back of the throat. And indeed is there the sensation of a Chocolate after taste after blowing the nose..."

"...My favorite Rapé of all is Clarity. Simply the perfect Rapé, this blend is the union of new and the old, it has a magical effect and a unique taste, and natural cacao adds to its greatness. It heals, calms and recharges your being. All while being overwhelmed with the sensation of deep clarity and understanding, allowing the user to transcend far and beyond..."

"...I never thought to order this one but after trying the sample you sent me I can say it is a beautiful blend. The mint is immensely sharp but it's short lived. The cacao is a beautiful touch, subtle but definitely there. I generally go for the more grounding blends and would be interested to see how it feels to add a little Mapacho to this one. This blend would be great in times of anxiety to bring focus to a sharp point..."

"...Clarity provides me with an initial cooling sensation and residual efficacy in terms of detoxification..."

"...The best Rape for getting more clarity. Really love this one and use it a lot in my ceremonies and retreats. Im waiting for it since a long time and hope I can use it soon again..."