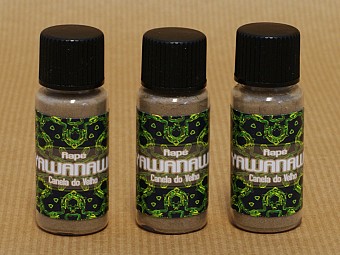 (New Batch #2358). Canela De Velho is one of the strongest of all the Rapé types available. Deep and intensely grounding as well as extremely strong. This s a new Rapé made from traditional ingredients obtained from the Yawanawá, but mixed in a new post shamanic fashion by a magician who understands the respect and honor needed to work with these plant spirits. In most cases it would be wise to start with as little as possible and increase as one gains more experience. More information can be found below.

Note: As with all Rapè, differences between batches are to be expected, for those used to this variety you will find this batch slightly different than you may be used to.

This exquisite Rapé is one of the strongest of all the Rapé types available. Deep and intensely grounding as well as extremely strong, and in most cases, overwhelming. The user should find a comfortable space to administer with some time to process the effects.

This variety would suit the more experienced user of Rapé’s. This is a new Rapé preparation made from traditional ingredients obtained from the Yawanawá, but mixed in a new post shamanic fashion by a magician who understands the respect and honour needed to work with these plant spirits. Varied doses produce a range of healing and cleansing properties. In most cases it would be wise to start with as little as possible and increase as one gains more experience. Purging is quite possible and the after taste although quite pleasant is extremely strong and can cause a continuous stream of phlegm in the throat. Watering of the eyes is almost certain. Intention and setting should play an important aspect in the administration of this Rapé and one should take time and space to prepare for its effects. In other words: It is strong.

This Rapé came as a somewhat coarse powder with lots of rough bits in it. After sieving it is now an extremely fine and dry powder. It takes great effort to produce such a fine powder at a 150 micron fineness. This is our standard because this provides the best Rapé experience. All our Rapé is processed to a high standard and consistent fineness and dryness, using laboratory grade sieves and dehydrating equipment, before packaging.

The Yawanawá were the first tribe that initiated a woman to become a shaman, setting a huge example in the history of shamans. In their language rapé is called Rume and the Yawanawá preferably blend Rume with Tsunu ashes and mapacho, which gives this special blend a very refined taste. In addition, Tsunu is used for healing purposes and has a supportive role during ayahuasca ceremonies.

Canelo do Velho, also known as Old Cinnamon (Miconia albicans) is a plant that belongs to the family Melastomataceae. Originally from northeastern Brazil, it can be found more easily in the states of Bahia and Sergipe and popularly used for medicinal purposes.