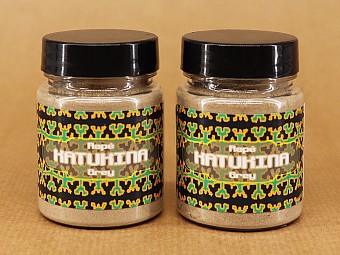 (Batch #7110) This is a unique and complex Rapé we blended with an endless array of ingredients. With a variety of tribal Rapé's and ashes and several types of Rustica Tobacco, and aromatic and magical ingredients were added over time. Katukina Grey is a medium strength all-round Rapé for opening of the astral gates, centering and guidance. This light grey Rapé has a mild musty aroma with an herbaceous character. More detailed information and reports can be read below.

This is a Rapé blend made in our own space, and like Clarity, Orchid Fever and Pineal Flush, a unique and complex home-made Rapé that contains an endless array of ingredients. Birch is one of them and this gives this Rapé an almost earthy and smokey hint. With a variety of tribal Katukina Rapé's and ashes and several types of Rustica Tobacco's as basis, numerous aromatic and magical ingredients and fragrances were added over time. This new Rapé comes from a barrel that has been maturing over a year's time. As the main ingredient of this blend is a powerful Katukina Rapé, we have called this "Katukina Grey". However it is not a traditional Katukina production.

Katukina Grey is a medium strength all-round Rapé for opening of the astral gates, centering and guidance, striking ones mind with power and motivation, and providing male energy and refocus. This light grey Rapé has a mild musty aroma with an herbaceous character reminiscent of summer and rosehip bushes. The Rapé that can be described as moderate with a manageable initial searing kick, that however lasts a bit longer than most other Rapé's. At higher doses, it can be perceived as the radiant sensation descending from the top of the skull down through the head and further down in the body. This sensation along with a quieting of the mental chatter is very relaxing, focusing and leads the user to its center, where the gates are opened and visions and astral impressions can be received. The plant spirit is somewhat of a trixter, but guiding and protecting, not unlike Hindu god Ganesha, the Roman Janus, or other gatekeeping spirits. Even at higher doses the plant spirit opens the gates soft and welcoming.

Ideal for continuous use as a link back to ones being's core, or ceremonial with the intention to open gateways, start new projects, or land in a safe and secure place. At lower doses this Rapé is soothing and relaxing, at larger doses it turns the internal winds in motion and the mundane is replaced with that beyond.

A wonderful and detailed article about the Katukina and our connection with them, can be found here.

Some feedback from friends:

"...I must say, this is the most wonderful Rape I have been able to taste so far. The "Katukina Grey" comes on very smoothly and spreads wavelike all over the body. It is a very physical feeling and thus relaxing and grounding at the same time. By doing this it is connecting all the energy centers on the physical, emotional, mental and spiritual level. There is very little phlegm or other side effects. I would say this is an absolute masterpiece of your creation and certainly worth all the energy and commitment you needed to create it. Very soon after the initial effects I can feel the union with myself and existence, leaving me light and whole in a mood of happiness. For me the "Katukina Grey" it is the integration of all the positive effects of the ones I could try so far without their "downsides". Also its fresh, slightly minty taste is wonderful..."

"...Texture and consistency reminded me of some of your other batches (Yawanawa Mulateiro in particular). Relatively gentle on the sinuses. Sensation upon administration left my mind feeling the Rapé make its way towards the top of my head, only to open up and spread across my head in the same way a water fountain would. Refrained from blowing my nose for a few minutes but it wasn't long before my sinuses began draining. Upon administration I was able to identify what felt like a feeling of calmness, introspection, grounding, and a lack of desire to talk to others. I noticed a slight lack of focus despite feeling grounded, and in this way it reminds me of a more trance-inducing or meditative blend. This seems like a consistent blend that may be better suited for later in the evening..."

"...Katukina Grey. The scent is "smooth", soft but strong, not sharp or pungent. Deep, at one point it reminded me of being in a bakery. Full, a little flowery but not perfumey at all. A small dose: the first impressions were sharper than I expected but with an immediate sense of clearing in my back sinuses, then i felt a twinge in my gut, a visceral sensation, then it went back to my head, and I had the very clear mental image of the 1000 petal lotus at my crown chakra. And an incredible sense of wanting to sit in meditation. I came up with a name: Lotus, or jungle lotus, or Padma, or Kamal. The effect seemed to last for a while, and a sense of very smooth contained energy remained. Very Feminine but like a wise warrior woman spiritually. Like being held in someone's hands and challenged at the same time. I did have a sensation of the flow moving from the pituitary to the pineal gland and sort of settling back there..."

Katukina or Catuquina, Katokina, Katukena, Katukino are generic terms that are attributed to five linguistically distinct but geographically proximate indigenous groups that live in southwestern Brazil at the border of the Amazonas and Acre. The Katukina are a tribe that is very connected to the usage of sacred plants. They consider themselves as the first tribe to receive the Kambo medicine straight from the frog. They still carry a vast knowledge about plants and the spirit of the world. Their Rapé is strong and deep, and it carries the wild and powerful spirit of the jungle.

More on the Katukina