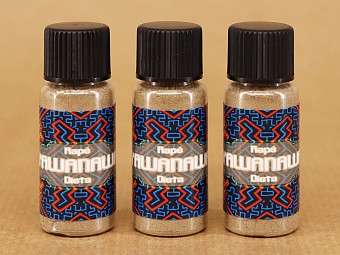 (Batch #4041) A very special Rapé and extremely rare one off Rapé. It will never come back again. Read the main description below. It imparts a gentle warming with the tobacco coming through with an almost peppery sensation. It is a very calming, meditative and pleasantly persistent in effect. This Rapé was made by Shaneihu Yawanawa. He is a very talented musician and his CD Kanaro can be found here. This Rapé is a "one off" since Shaneihu has finished his diet and although his Rapé's are always of excellent quality this one is very special for being made in this deep concentration and connection to the ancestral force of the forest. More information below. 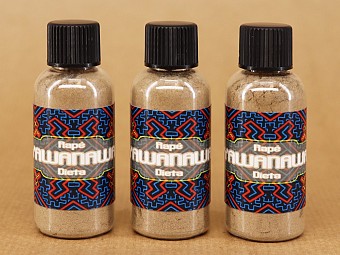 Extremely rare and limited stock (last ever stock) of this unique Rapé made by a member of the Yawanawa family! This Rapé is made while the maker was performing a strict "dieta", that lasted one whole year!

As with most real Yawanawa Rapés the recipe is predictable: it is the classic and as some of the older members of the tribe say the only recipe that truly deserves the name Yawanawa; Tobaco and Tsunu ashes. Naturally the younger generation is more flexible in their recipes.

That said this Rapé is not as "grey" as many made by the Yawanawa and is a light sandy colour due to the lower ash content. It is not as sharp on the sinuses and the initial hit is not as abrupt or painful as many. It imparts a gentle warming with the Tabaco coming through with an almost peppery sensation. It is a very calming, meditative and pleasantly persistent in effect.

As the recipe is often similar what makes the character of the different Yawanawa Rapés or 'Rumã' as they call it in their language, is the energy of the one who makes it. His intention, his focus, his state of mind, the whole energy of the person is in the finished Rapé. That’s why it is important that the maker is dedicated to the spirituality of his people and he never looses sight that he is making Rapé for others to heal themselves or connect to their spirituality. That is exactly what makes this Rapé special, it was made not only by someone who has completed a diet but this batch of Rapé was made during his diet, a year long mystical journey of getting in touch with his tradition and cultural essence, of communicating with the non physical plain, of learning the mysteries of their spiritual science. They have many diets in their tradition but the one year long "Muka" diet is their main initiation where one goes from being a “normal” person to someone dedicated to medicine, who knows how to pray, to heal and who has truth in his words.

This Rapé was made by Shaneihu Yawanawa, one of chief Nixiwaka's 33 children and grandson on his mothers side to Pajé (medicine man) 'Yawarani' who recently passed away completing 105 years on this globe. Yawarani, together with his friend Tata were the last keepers of the tradition when the Yawanawa in the eighties started to reconnect to their cultural essence, a true legend who until the very end of his well lived life was active, worked, joked, sang, prayed and taught people his knowledge and wisdom. Shaneihu being probably the last he guided on his diet. Shaneihu has lived some years in the city where he got his university degree after which he decided to move back to the forest and dedicate his time to his family and tradition and to sharing those with the outside world. He is a very talented musician and his CD Kanaro can be found here on Katukina. This is a truly wonderful collection of medicine songs.

This Rapé is a "one off" since Shaneihu has finished his diet and although his Rapé's are always of excellent quality this one is very special for being made in this deep concentration and connection to the ancestral force of the forest. Haux Haux!

This is an extremely fine powder, creamy to the touch. It takes great effort to produce such a fine powder, entirely void of stems, veins, grains and bits, and at a 150 micron fineness. This is our standard. All of our Rapé varieties, be it a genuinely tribal Rapé, Cinza (ashes), or Tabaco powder, we process this to a high standard and consistent fineness, using laboratory grade sieves and milling equipment. The finest powdered Rapé's produce the best experience!

The Yawanawá, or the tribe of the white-lipped peccary, are a small tribe of 1,300 people, living remotely in only a few villages along the Gregório River. They are known as warriors, as they always keep on fighting, even in hard times. At some point in history their tribe was almost extinct, with only about 300 members left. Nowadays their tribe has grown again, and their traditions and knowledge have been conserved in a very strict way.
The Yawanawá were the first tribe that initiated a woman to become a shaman, setting a huge example in the history of shamans. In their language rapé is called Rume and the Yawanawá preferably blend Rume with Tsunu ashes and mapacho, which gives this special blend a very refined taste. In addition, Tsunu is used for healing purposes and has a supportive role during ayahuasca ceremonies.