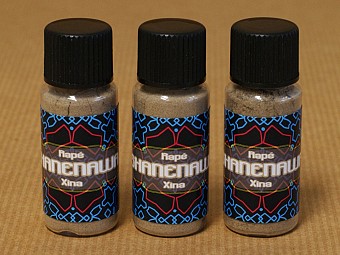 Last restock (Batch #8883) A rare Rapé from tribal origin. Shanenawa Xina immediately has a powerful effect similar to the Pau Pereira in its tone and frequency. Overall very strong but with subtle after effects. This particular blend has a divine creamy scent and is overall very luxurious in its appearance and quality. Although it looks like a semi brown Rapé, its energy is much like a typical grey Rapé. A high frequency with rich notes and not too heavy on the Tabaco. More information can be found below.

A rare Rapé from tribal origin. Shanenawa Xina immediately has a powerful effect, similar to the powerful Pau Pereira, in its tone and frequency. Overall very strong but with subtle after effects. The Shanenawa rarely prepare Rapé for other than their own tribe so we are very thankful to them for allowing us to share some of their medicines. This particular blend has a divine creamy scent and is overall very luxurious in its appearance and quality. Although it looks like a semi brown Rapé, its energy is much like a typical grey Rapé. A high frequency with rich notes and not too heavy on the Tabaco. As with most Rapé some type of healing and cleansing may manifest itself through the experience. With this, some dedicated time is needed to fully enable the user to understand it qualities and subtle effects. Due to the strength of Rapé in general its a good idea to be away from any distractions and in a safe quiet space, Xina will cause the eyes to water almost immediately and its powerful effects may debilitate the user for some minutes. Smaller doses are advised.

A report from one of our customers:

"...Strong, subtle and smooth at the same time, it brings calm to the senses and a deep feeling of gratitude and inner wisdom. This is a very unique and special Rapé to me, that has fast acting effects on lower dosages and an extremely profound healing experience on higher dosages..."

The Shanenawa belief in the existence of forest spirits, the jusin, is very clearly apparent. These spirits are beyond nature and humans alike, making them supernatural and superhuman. There are good and bad jusin. The principal such entity is called jusin tsaka who, the Indians say, takes the form of a monstrous animal that destroys and burns everything as it passes by. The Shanenawa say that it is very common to find the footprints of jusin tsaka in the morning, since the spirit only ‘attacks’ at night. The adults use the figure of this jusin to scare children and make them obey them. The Shanenawa consume ayahuasca (called umi in their indigenous language), a drink based on a particular vine species and hallucinogenic leaves that induces visions. Through these visions, they communicate with the spirits of their ancestors and obtain help to solve their problems. Umi is also used as a medicine, since they believe that by ingesting it will make their body healthy. The Indians claim that the community does not possess a shaman. All the same, their herbal medicine is very rich and includes remedies for practically everything. They also use fauna for cures, the most sought being toad venom or vaccine. The Indians apply the substance, taken from a rare species of giant leaf frog, Phyllomedusa bicolor, to their arms at three points burnt with fire. In a few minutes, they vomit the entire contents of their stomach and thereby renew their strength and disposition to work. The toad venom is associated with the medicinal property of dispelling laziness and panema, a term taken from the Nheengatu general language, which means a lack of fortune in hunting.