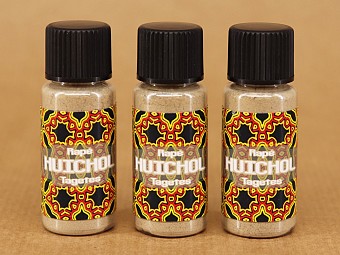 (New batch #2943). A forceful and very aromatic Rapé. It has a refreshing effect on the mind and leaves the user in focus and contentment. This blend came from a Katukina collaboration between our Brazilian friends and our network of sacred herbs. A nice blend of Corda and Moi Tabaco and Parica ashes, infused with the power of the Huicholi herb called Tagetes Lucida (Mexican Tarragon). The Zapotecs use Tagetes as a primary herb in purification rituals. "Lucida" means: "shining" or "clear". More information below. 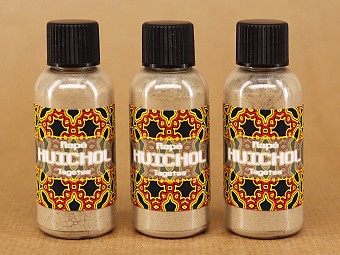 Note: New batches can vary in effect, flavour and consistency.

A forceful and very aromatic Rapé that has the tendency to make the eyes water and to leave one in a very clear state of mind. It has a refreshing effect on the mind and leaves the user in focus and contentment. The aroma of the Tagetes herb clears thinking, relieves tension, aids emotional control.

This is a special North-South Rapé blend, a meeting of ancestral cultures. This meeting of shamanic cultures has been happening on many levels. There is the Camino Rojo, the Red Path from Mexico where we one finds the meeting of the Condor and the Eagle. In this meeting of cultures and traditions one finds a meeting of ancestral medicines, Yawanawa partaking of Peyote in the desert, Huicholi Marakame drinking Ayahuasca in the forest and so on. This exchange has been happening since time immemorial: the North Amercian Natives taking Peyote way north, in Brasil the costal Guarani had a trail that stretched out for thousands of kilometres to the Amazon where they walked for months to work with the sacred Ayahuasca. Even the Huicholi themselves had to walk half way through Mexico from the coastal regions where they lived into the Wirikuta desert to their inner sanctum to find their Hikari or Peyote.

This Rapé blend came from a Katukina collaboration between our Brazilian friends and our network of sacred herbs. A nice blend of Corda and Moi Tabaco and Parica ashes, infused with the power of the Huicholi herb called Tagetes Lucida (Mexican Tarragon). As a native Marigold of Mexico and Guatemala, Tagetes lucida is well known by the locals as a substitute for Tarragon (Artemisia dracunculus), and as such is used in teas, vinegars and dishes. The Zapotecs use Tagetes as a primary herb in purification rituals. "Lucida" means: "shining" or "clear".

The plant is popular with the Tarahumara Indians of Chihuahua and is used by the modern Huichol Indians in their religious Peyote (Lophophora williamsii) rituals. The plant is said to enhance closed-eye visions. The botanical genus name Tagetes is in reference to a Roman deity, Tages which, probably, was originally an Etruscan god of prophecy. The species name lucidus means "bright", or "light". In Mexico, Tagetes has been used since pre-Hispanic times with many of its properties ascribed to this plant, known as Yauhtli in the Nahuatl language. The leaves were an important flavouring of "Chocolatl", the foaming Cocoa (Theobroma cacao)-based drink of the Aztec.

Bernal Diaz, one of the Conquistadors sent by Spain to explore middle America, recorded in his diary the Conquistadors astonishment at the gardens of the Aztec Emperor Montezuma, "with their many varieties of flowers and sweet-scented trees... his gardens were a wonderful sight." But plants were not merely used for decorative purposes as Diaz later notes; Montezuma kept a place within the palace gardens for "the medicinal and useful herbs". The Aztecs had developed a highly sophisticated system of medicine, in which these medicinal and useful herbs played a vital part. We know this because, in the wake of the Conquistadors, scholars travelled to the Americas to record the knowledge of the indigenous people in the form of codices and other documents. We can also see traces of traditional uses of herbs in the contemporary use of medicinal plants by Mexican communities.

In Sahagún’s description of the use of Tagetes Lucida: "it is an ejector of humors, it is a medicine... one who has chills drinks an infusion of it. It is rubbed in the hands with water. And with it there is incensing, and there is washing." It is worth mentioning that powdered Tagetes Lucida was also administered to certain sacrificial victims, with the dual intention of inducing both anaesthetic and hallucinogenic effects.

When Tagetes Lucida was administered to sacrificial victims, it was as a powder of dried herb, which would be blown into the face of the intended victim. It is not especially likely that this is an effective way of administering the drug. There are manyfold properties to Tagetes Lucida and Erecta, that, although commonplace to us, they actually held a central place in the Aztec world, being both sacred herbs of Tlaloc, and enormously important medicines.

Customer report:
“...On a low to moderate dose, the initial blow fills the nose and throat with a piercing “spicey” aroma, immediately watering the eyes and bringing low to moderate phlegm discharge. As phlegm is released a very noticeable feeling of "brightness" fills our mind and body sensations. The skin feels lit up and alive. The mind feels elevated, uplifted; the brain completely lit up. This is not a grounding and rooting Rapé; quite the opposite, it brings a bright energy into the head that cuts right through all mental tiredness, fog, dullness, and cognitive confusion. Leaving the mind with an exquisite sense of shinning mental brightness and clarity. Bright Mind, New Mind! Katukina Team, thank you once again for an amazing Rapé..."