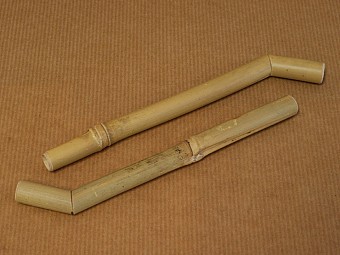 Restock expected. Simple bamboo Tepi (snuff applicator). These are produced from bamboo, in Sweden. They are used to administer herbal snuffs and powders such as Nu-nu, Rapé and Tobacco snuffs. Sold without a burlap pouch.

Bamboo herbal snuff applicators, handmade. They are used to administer herbal snuffs and powders such as Nu-nu, Rapé and Tobacco snuffs. These wonderful works of art are produced from bamboo, in Sweden. Approximate size 15-17 cm.

General suggestion is to use a pea sized amount (50% for each nostril) of medicine for beginners, and dosage can be increased after prolonged use of a specific rapé. Also, it is suggested that you use them within a quiet sacred space without any interruptions – sitting upright, either cross-legged or in a chair with eyes closed after application. Also, suggested slow breathing after application through the mouth/nose is very important.