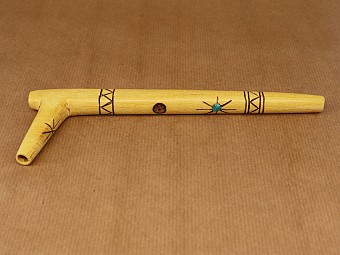 Wonderfully handcrafted Tepi, made from Amazonian Aspidosperma wood. This tepi has been carved from 1 piece of wood. Decorated with carvings, pyrography, a Yage vine slice and a small semi precious stones. The stone can vary from the picture. They are used to administer herbal snuffs and powders such as Nu-nu, Rapé and Tabaco snuffs. 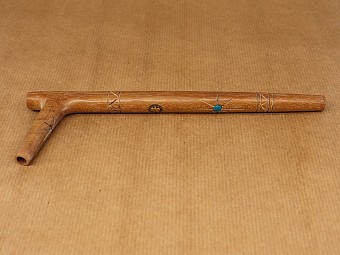 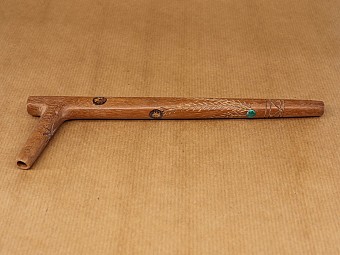 A collection of elegant handmade Tepi carved from 1 piece of wood from our new craftsman in Peru. Made with various woods, and decorated with carvings, pyrography, a Yage vine slice and some small semi precious stones. Tepi are used to administer herbal snuffs and powders such as Nu-nu, Rapé and Tobacco snuffs.

Traditionally, Nu-nu, Rapé and Tabaco snuffs are applied by using a pipe made from bamboo or bone, which is blown through each nostril, on both sides. They can be self-administered using a V-shaped self-applicator pipe, which connects the mouth to the nostrils. Alternatively, the Rapè can be administered by another person using a blow pipe, which connects the blower’s mouth to the other person’s nostrils. The self-applicator pipe is known as ‘Kuripe’, and the blow pipe is know as a ‘Tepi’ in the Brazilian tradition.

General suggestion is to use a pea sized amount (50% for each nostril) of Rapè for beginners, and dosage can be increased after prolonged use of a specific Rapé. Also, it is suggested that you use them within a quiet sacred space without any interruptions – sitting upright, either cross-legged or in a chair with eyes closed after application. Also, suggested slow outward breathing through the mouth/nose after application is very important.