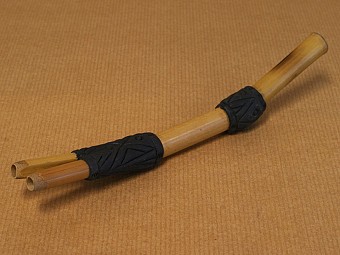 A beautifully handcrafted 3 section double barrel Tepi (snuff applicator) made from bamboo and epoxy resin. They are used to administer herbal snuffs and powders such as Nu-nu, Rapé and Tobacco snuffs. A powerful tool to apply Rapé in both nostrils in one single blow. The epoxy resin joining the 3 sections is decorated with various patterns and the bamboo section is plain. More information and usage instructions can be found below. This is a very fragile item. Please handle with care.

Prices below have been reduced by 20% for a limited time.

These 3 section double barrelled Tepis were made by our Kuntanawa team from the Tete Pawã Workshop.  They enable Rapè administration of both nostrils at once! They are made from bamboo and epoxy resin with a variety of imprinted patterns.

Usage instructions:
Fill both the front tubes of the tepi using a narrow spoon while holding it in a horizontal position. Then tap the tepi gently to allow the Rapé to spread over the front tubes. The receiver should tilt his or her head slightly backwards. A long and strong blow is needed to fully eject the powder in the nostrils. The tepi can also be filled through the mouthpiece, however generally this requires a stronger and longer blow.

Most of our medicines and handicrafts from the Kuntanawa family are produced at the “Tete Pawã Arts and Medicines” workshop. The workshop is based in the municipality of Marechal Thaumaturgo on the banks of the upper Juruá River close to the border with Peru. Tete Pawã is the indigenous name for the Harpia Eagle in the Pano language, the Gavião Real or Royal Hawk as they call it in Portuguese. Tete is big and Pawã is Eagle. It is one of the most sacred birds in the Indigenous traditions of the region. The project was envisioned by Rudy who with the help of his friends and family members is at the front of this enterprise, all of them dedicated to the spirituality and the medicine traditions of the forest and their ancestors.

We at Katukina have been sponsoring them with tools and machines, support and by spreading their beatiful arts and medicines through our network. They make their handwork and medicines in their workplace but to collect the raw materials a lot more people get involved, and like that the funds get spread around. Someone collects a herb, another burns the ashes for the Rapé and so on.

Report from a customer:

"...Thank you, I Love this hard to find tool. I don’t recall seeing this anywhere else either in South America or online. Experiencing Rapé through both nostrils simultaneously is an entirely different experience from the usual way that Rapé is administered. Very centering. Highly recommended..."