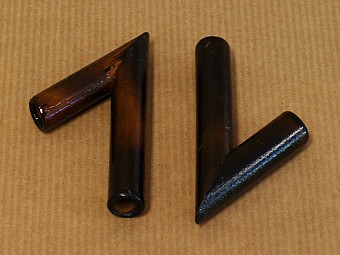 Large bamboo Kuripe (snuff applicator). Shellac coated. In protective burlap pouch, handmade. Dark roasted effect. The inside and outside are coated with natural Shellac. Shellac acts as a varnish. It protects the bamboo from moisture and prevents snuff to build up and gives the snuff a smoother ride through the pipe. These are produced from bamboo, in Sweden. They are used to administer herbal snuffs and powders such as Nu-nu, Rapé and Tobacco snuffs.

Bamboo herbal snuff applicators, handmade. They are used to administer herbal snuffs and powders such as Nu-nu, Rapé and Tobacco snuffs. These are produced from bamboo, in Sweden.