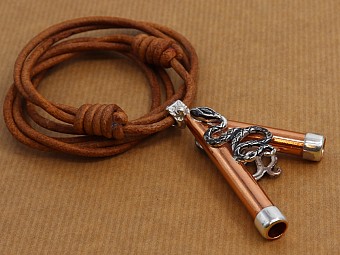 An unusual and ornate Kuripe for that special gift. Made from high quality copper, with the elegant snake decoration made from 92.5% certificated silver that is soldered onto the Kuripe with silver wire. Each Kuripe comes with an adjustable leather cord and small cotton pouch included. Additionally a coconut fiber pipe cleaner is included. These Kuripe are lovingly handmade in Bulgaria by a jeweller.

Luxury Kuripes, made of copper and silver. The placed ornaments are made of 92.5% certified sterling silver. The pieces are soldered with silver. This is a strong Kuripe that will last for a very long time, they can withstand great forces. Unlike Kuripes made from bamboo, these metal Kuripes can be handled extremely roughly. It can be carried in the pocket without any concerns. Since its metal it can easily be cleaned and sterilised in boiling water. The angle of the two pieces is set by snuff connoisseurs with years of experience with Kuripes of all sorts. The Kuripe comes in 1 size. The size fits most noses and face sizes.

The creator Timea has been working as a goldsmith/jeweller since 1989. She hand makes these unique Kuripe in her small workshop. She tried many Rapé applicators during many years of ceremony, and she found that most of them do not really last long and quite vulnerable to various damages, so she developed and created her own unique Kuripe.

General suggestion is to use a pea sized amount (50% for each nostril) of medicine for beginners, and dosage can be increased after prolonged use of a specific Rapé. Also, it is suggested that you use them within a quiet sacred space without any interruptions, sitting upright, either cross-legged or in a chair, with eyes closed after application. Also, suggested slow breathing through the mouth after application is very important.