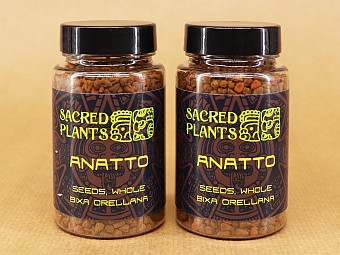 Annatto seeds are used to obtain a natural orange-red condiment and dye (also called achiote or bijol) obtained from the waxy arils that cover its seeds. This is used in many traditional dishes and other food preparations.  Annatto is known as Achiote in Peru and as Urucum in Brazil.  Throughout the rainforest, indigenous tribes have used Urucum seeds as body paint and as a fabric dye. Body-painting with Urucum remains an important tradition of many Brazilian native tribes.  More information below.

Annatto (Bixa Orellana) is a profusely fruiting shrub or small tree that grows 5-10 m in height. Approximately 50 seeds grow inside prickly reddish-orange heart-shaped pods at the ends of the branches. The trees are literally covered by these brightly colored pods, and one small annatto tree can produce up to 270 kg of seeds. The seeds are covered with a reddish aril, which is the source of an orange-yellow dye. Annatto is known as Achiote in Peru and as Urucum in Brazil. It grows throughout South and Central America and the Caribbean and can be found in some parts of Mexico as well.

Annatto fruits and seeds are used to obtain a natural orange-red condiment and dye (also called achiote or bijol) obtained from the waxy arils that cover its seeds.  The ground seeds are widely used in traditional dishes in Central and South America, Mexico, and the Caribbean, such as cochinita pibil, chicken in achiote and caldo de olla. Annatto and its extracts are also used as an industrial food coloring to add yellow or orange color to many products such as butter, cheese, margarine, ice creams, meats, and condiments.  North, Central, and South American natives originally used the seeds to make red body paint and lipstick, as well as a spice. For this reason, the Bixa orellana is sometimes called the lipstick tree.

The species name, Bixa orellana, was given by Linnaeus after the Spanish conquistador, Francisco de Orellana, an early explorer of the Amazon River. The name achiote derives from the Nahuatl word for the shrub, āchiotl [aːˈt͡ʃiot͡ɬ]. It may also be referred to as aploppas, or by its original Tupi name uruku, urucu or urucum ("red color"), which is also used for the body paint prepared from its seeds(1).

Throughout the rainforest, indigenous tribes have used Urucum seeds as body paint and as a fabric dye. Body-painting with Urucum remains an important tradition of many Brazilian native tribes. It was reportedly used for body paint among the native Taínos in Borinquen, Puerto Rico. The use of Achiote hair dye by men of the Tsáchila of Ecuador is the origin of their Spanish name, the Colorados. The Aztec people of Mexico used Achiote seeds as source of a red ink for manuscript painting in the 16th century. It has been traced back to the ancient Mayan Indians, who employed it as a principal colouring agent in foods, for body paints, and as a colouring for arts, crafts, and murals. Although mostly only the seed paste or seed oil is used commercially today, the rainforest tribes have used the entire plant as medicine for centuries. A tea made with Urucum is used as an aphrodisiac and astringent, and to treat skin problems, fevers, dysentery, and hepatitis. The Annatto tree is believed to originate in tropical regions from Mexico to Brazil. It was probably not initially used as a food additive, but for other purposes such as ritual and decorative body painting (still an important tradition in many Brazilian native tribes), sunscreen, and insect repellent, and for medical purposes.

The facial paint with Urucum is an integral part of most tribes from Brazil and South America in general. In many cultures it is part of the daily routine after the morning bath to paint the face with Urucum. There are specific designs that are used as tribal identification and for aligning with spirit animals or the enchanted forces of the forest. There are also more individual designs that they paint on their faces that are particular to each person. The Urucum can also be mixed with other plants and oils for instance for war paint or sweet oils for sexual attraction.

Annatto seeds are collected from a relatively small tropical evergreen tree that grows 5-10 m high. The leaves are heart-shaped, glossy and provide an attractive background to the large bright pink flowers, which have the appearance of wild roses. Prickly, heart-shaped, scarlet seed-bearing pods form after flowering and, when ripe, split open to reveal a reddish-yellow pulp surrounding about 50 triangular, pyramid-shaped, indented seeds. Dried annatto seeds are about 5 mm long, look like little stones, and are a dark, red-oxide rusty colour. When cut in half, they reveal a white centre coated with the dusty, finger-staining red skin. The aroma is pleasant, sweetish, peppery and has faint overtones of old dry peppermint. The flavour is dry, mild and earthy(2).  It is hardy to zone (UK) 10 and is frost tender. The flowers are pollinated by Bees(3). More detailed botanical information available here (4).