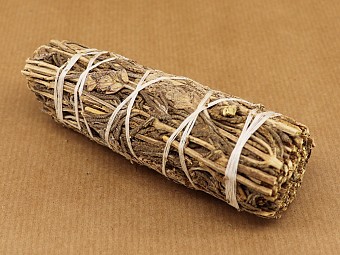 Lavender Sage, also called Purple Sage, is named for its clusters of purple flowers. Though not to be confused with the plant Lavender (Lavendula augustifolia). It grows all over the Southern Californian coastal line and is traditionally used for its calming, peaceful and sedating effects. It relieves anxiety and inspires love. A beautiful smudge for ceremony and ritual. 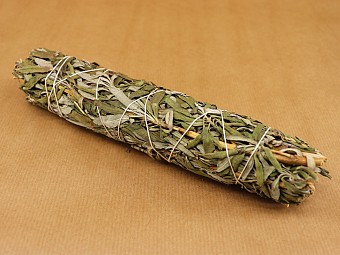 Lavender Sage, also called Purple Sage, is named for its clusters of purple flowers. Though not to be confused with the plant Lavender (Lavendula augustifolia). This smudge stick is an extraordinary tool for the shaman and spiritual healer to burn and smudge incense resins without the need for a charcoal. The smudge stick is used and works as a Palo Santo stick or White Sage smudge stick. Light the end of the stick, extinguish the flame and let the stick smoulder. As a Palo Santo stick, the smudge stick extinguishes its self after a while, and can be reignited if more fragrance is needed. It can be used as a preparation to meditations, sacrificial smoke to deities or smudging of people, places and objects. Ideal to carry and use when negative and undesirable energies are found within oneself or ones surroundings.

Salvia lavandulifolia is a compact subshrub or woody-based perennial, to 60cm tall and wide, with narrow, grey-green, downy leaves and, in summer, spike-like racemes of violet-blue flowers that have a wonderful fragrance. It also has light blue/mauve flowers that are very attractive to bees and other pollinators.