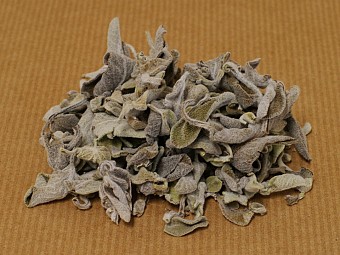 This Sage suits as a wonderful tea, and is used as incense, with a fragrance similar that of White Sage (Salvia apiana). Loose incense is generally burnt on charcoal tablets. The leaves can also used as a tea. One leaf is enough for a cup.
This herb was sustainably and carefully handpicked from the wild in June 2017 by a friend who lives in the mountains of Crete, area Preveli in Greece. Pure whole leaves, Harvested with love. All the sticks and stems are removed. For a tea, steep one single leaf in a cup of boiled water for a few minutes, and add honey. 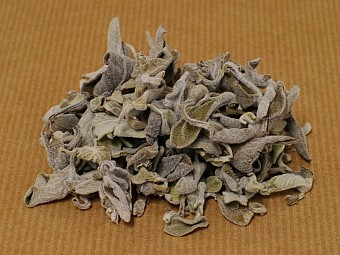 Sage has been considered a sacred herb since the times of antiquity, a salvaging and saving herb. Its very name, Salvia, comes from the Latin "salvare", to salvage, save. Different Sage species have been used around the world for thousands of years. Still today, the North American Indians use it to fumigate their sweat huts, to purify and facilitate the communication with divine powers. Its said to remove negative energies and is associated with the idea of wisdom. In the Medieval times, sage was considered a 'panacea', a 'cure-all', and was cultivated in monastery gardens. Sage also plays a part in many Muslim rituals, at weddings and births as an incense. It has a fragrance similar that of White Sage (Salvia apiana). Loose incense is generally burnt on charcoal tablets.  The leaves can also used as a tea. One leaf is enough for a cup.

The fragrance, burned in an aroma lamp alerts the senses, is tonic to the mind, sharpens the memory and is useful to have around in cases of mental fatigue, exhaustion and depression. More an intellectual fragrance, it aids in times of emotional upheavals and crises, brings clarity of mind and strength.

This herb was sustainable and carefully handpicked from the wild in June 2017 by a dear old friend who lives in the mountains of Crete, area Preveli in Greece.

Due to its wide variation in leaf shape, there has been a great deal of taxonomic confusion over the years, with many of the leaf variations of Salvia fruticosa being named as distinct species. These include S. libanotica, S. triloba, S. lobryana, and S. cypria, which are now considered to be Salvia fruticosa. The variation in leaf depends on geographical area, with plants growing on the western part of Crete having entire leaves with flat blade and margins and dark green upper sides. Plants growing on the eastern side of the island have much smaller leaves, with deeply three-lobed yellowish-green blade and undulate margins. The variation continues throughout different parts of Greece.