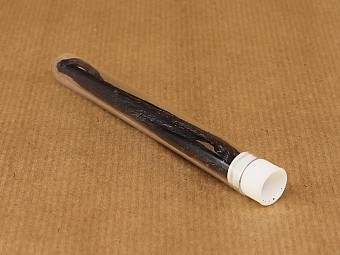 Back in stock: Fresh "Black" Vanilla fruits (pods) from Madagascar. A divine scented treasure from nature. The very slow drying process in cool shade ensures optimal freshness and colour, and a strong fragrance and aroma. To spice up and aromatize your personal blend or to give a new twist to your favourite Rapé you can add a small piece of a Vanilla to your bottle of Rapé. Simply cut a piece of 1 cm of the pod and stick it in the powder. Immediately its fragrance will be absorbed by the dry Rapé powder, and give it a lush aromatic hint.

To spice up and aromatize your personal blend or to give a new twist to your favourite Rapé you can add a small piece of a Vanilla to your bottle of Rapé. Simply cut a piece of 1 cm of the pod and stick it in the powder. Immediately its fragrance will be absorbed by the dry Rapé powder, and give it a lush aromatic hint.

Vanilla is a genus of Orchids native to Central America. Vanilla is the only edible fruit of the Orchidaceae (Orchid family), the largest family of flowering plants in the world. It is also the second most expensive spice after Saffron (Crocus sativus), due the extensive labor required to grow the seed pods used in its manufacture. Regardless of its high cost, Vanilla is widely used in both commercial and domestic baking, perfume manufacture and aromatherapy.

Vanilla can be used as an emulsifier, natural sweetener, and as a natural calmative.

The first to cultivate Vanilla were the Totonac people, who inhabit the Mazantla Valley on the Gulf Coast of Mexico in the present-day state of Veracruz. According to Totonac mythology, the tropical orchid was born when princess Xanat, forbidden by her father from marrying a mortal, fled to the forest with her lover. The lovers were captured and beheaded. Where their blood touched the ground, the vine of the tropical orchid grew.

In the fifteenth century, Aztecs from the central highlands of Mexico conquered the Totonacs, and the conquerors soon developed a taste for the Vanilla bean. They named the bean "Tlilxochitl", or "black flower", after the mature bean, which shrivels and turns black shortly after it is picked. After they were subjected to the Aztecs the Totonacs paid their tribute by sending Vanilla beans to the Aztec capital, Tenochtitlan.

Vanilla was completely unknown in the Old World before Columbus. Spanish explorers who arrived on the Gulf Coast of Mexico in the early sixteenth century gave Vanilla its name. The word Vanilla derived from the Spanish name of the spice, vainilla, a diminutive of vagina, perhaps motivated by the sheath-like shape of the fruit. Spanish conquistador Hernàn Cortés is credited with introducing both the spice and Chocolate (Theobroma cacao) to Europe in the 1520s. Attempts to cultivate the Vanilla plant outside Mexico and Central America proved futile because of the symbiotic relationship between the Tlilxochitl vine that produced the Vanilla orchid and the local species of Melipona bee; it wasn't until 1837 that Belgian botanist Charles Francois Antoine Morren discovered this fact and pioneered a method of artificially pollinating the plant. Unfortunately, the method proved financially unworkable and was not deployed commercially. In 1841, a 12-year-old French-owned slave by the name of Edmond Albius, who lived on Isle Bourbon, discovered the plant could be hand pollinated, allowing global cultivation of the plant.[1][2]

Orchidaceae (Orchid family). Vanilla is a short-lived, tropical perennial Orchid vine that can grow up to 10 meters. It grows in low mountain rainforests, humid lowlands, savannahs and prairies. Native to the tropical forests of Mexico, it is now cultivated in many other parts of the globe, such as Brazil, Honduras, Java, Africa, and the West Indies. This climbing vine has a thick, succulent stem, and entire, thick, smooth, bright-green, pointed leaves, 12-25 cm long, and 5-10 cm broad. They grow in a zigzag pattern clinging to the bark by aerial roots formed by each leaf node. The flowers are produced in axillary bunches of 8 or 10. They are yellowish-green with a yellowish-orange labellum and about 10 cm in diameter. Vanilla flowers all year round but blooms mainly from January to May. The fruit is a pendant pod, 12-25 cm long, 3cm or more in circumference when fresh, and contains myriads of minute seeds. These pods, when properly cured and dried, are the Vanilla of commerce.

Vanilla is almost exclusively propagated from cuttings, although it can be reared from seeds, but not without considerably delaying the year of the harvest. A warm and moist climate, sandy, moist (not marshy) soil, a mixture of shade and sunshine, the shade predominating, is essential to its successful cultivation. The temperature should average from 75° to 80° F., but should not fall below 65° F. in winter, and the plants should be protected from the salty air of the ocean breezes. If a virgin forest is to be transformed into a vanilla plantation, all superfluous shade must be removed, while, when an open field is to be cultivated, shade trees must first be planted. After about 4 weeks, the cuttings will have taken root, and, in the third year, they begin to bear fruit, and continue to bear for a period of from 30 to 40 years, although with decreasing tendency after the tenth year. In Mexico, the vanilla is permitted to climb the highest trees, while, in Réunion, the expanding vines are so guided as to permit of easy access.

Like most orchids, Vanilla depends on insects for fertilization, but in Réunion, where these are absent, artificial fecundation must be resorted to. This is done by slipping aside the labellum, a dividing film, which separates the anther from the stigma, and pressing them lightly together. Care must be taken not to produce, in this way, too many fruits on one stalk, because, in this case, the plants would perish before the pods could ripen. The vine blossoms from March to June, the pod, however, does not ripen until the following January or February. Unfortunately, Vanilla in Mexico is picked before it ripens—namely, as early as October or November, chiefly because the crop is in danger of being stolen. This pernicious habit was noticed as early as 1811 by Humboldt.

The value of Vanilla depends greatly on the success of the curing process, which requires much skill and experience on the part of the operator. During this manipulation, the flavor of the bean is developed by a peculiar sweating process, a mode of fermentation, which causes the bean to shrivel and to assume a fine chestnut-brown color. This process is carried out differently in different vanilla-producing countries. Ripe Vanillas can be cured much more easily than those that are unripe, and the flavor is more permanent. First-grade ripe pods, when stored, become covered with crystals of vanillin in a few months, while the pods, when gathered green, do not form crystals, and are difficult to preserve (Charles E. Hires). The beans are finally sorted into different commercial grades, made into bundles, packed, and conveyed to the shipping ports.

Natural Vanilla is an extremely complicated mixture of several hundred different compounds. Though there are many of these compounds present in the extracts of Vanilla, the one predominantly responsible for the characteristic flavour and smell of vanilla is known as vanillin.

Vanilla has a complex floral aroma depicted as a "peculiar bouquet" and a flavor described as "pure, spicy and delicate" by author Frederic Rosengarten, Jr. described in The Book of Spices. Psychologists and medical researchers were aware of our positive reactions to the scent of Vanilla long before perfume makers recognised its potential. In experiments where an odour universally regarded as "pleasant" is required, vanillin has been a standard choice for decades.[3]

A curious fact is that recently scientists have shown that a single gene that codes for one odor receptor determines whether someone perceives the pheromone androstenone (a key component in male sweat) as odorless, smelling like urine or sweet Vanilla.[4]

The fragrance of Vanilla generates a sense of well-being and a feeling of relaxation. Its message of good temper and joy is antidepressant. Its aroma is euphoric and comforting, it attenuates bad temper and irritability, it loosens the tensions, diminishes insatisfaction and frustration, giving a sense of physical satisfaction related to the oral phase of the first infancy. For this reason the scent of Vanilla helps also to dominate nervous hunger, often caused by an affective emptiness, making us revive the primordial emotion of the totally satisfied baby after feeding. In fact, the aroma of Vanilla produces a beneficial regression, awaking in us the inner child. The fragrance of Vanilla also has a subtle aphrodisiac effect.

A Vanilla bean, carried, can also be used for luck, success, to restore lost energy and to improve the mind. It can further be used for meditation, healing rituals, mental clarity, dream pillows, dream clarification, and to enhance memory.