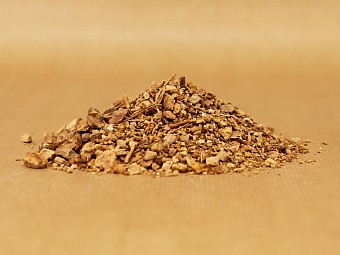 Roughly cut Sarsaparilla root, sustainably wild harvested from Peru. Free from pesticides, and naturally dried. Used since hundreds of years by the indigenous tribes and strongly valued for its potent cleansing effects. 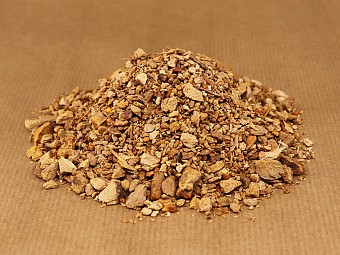 The species can be found in tropical rainforests and temperate regions in the Americas, Asia, India, and Australia. Sarsaparilla became known in Europe through the Spanish people in Mexico and South America. Sarsaparilla has been recognised as a populair ancient herb in traditional cultures in Mexico and South America, as well as in China and India. Throughout the course of history it has been used for a variety of purposes. Moreover, the root is said to improve physical performance.[5]

Sarsaparilla makes an interesting appearance in the Smurfs comics. It is one of the most favourite foods of the Smurfs, besides Smurfberries. Both Gargamel and Hogatha are shown to hate the taste of Sarsaparilla as they ate of the plant when they were changed into Smurfs.

Sarsaparilla root has been used for centuries by the indigenous peoples of Central and South America. Many shamans in the Amazon use sarsaparilla root internally and externally.

Sarsaparilla was also used by indigenous people of Mexico, such as the Aztecs. Its nature was considered to be "dry and hot", a reference to the ancient system of characterizing plants. Mexican Sarsaparilla was introduced to Seville about 1536. Few plants have had the rise and fall in popularity that Sarsaparilla has had. During its height of popularity, 1831, for example, 176,854 pounds of the herb were imported into England alone.[2]

The original Sarsaparilla was "observed by Schiede on the Eastern slope of the mountains (in Mexico). He was told that its roots gathered all year long, dried in the sun and tied into bundles, being carried to Vera Cruz for export." (1879)

A Tribe of climbing and shrubby plants, belonging to the Smilacaceae (Greenbrier family), with oval leaves conspicuously veined. Sarsaparilla got its name from two Spanish words: "Zarza" and "Parilla," referring to the thorny vines of the plant. The plant now under consideration is a native of Central America, especially of Honduras, Guatemala, Mexico, and New Grenada. Several varieties of the root come upon the market, of which the present species seems most valuable. According to Humboldt and Bonpland, this plant has an angular, twining, and somewhat prickly stem, the young shoots being smooth. Leaves ovate-oblong, acute, smooth, tough, five to seven-nerved, a foot long, on short petioles, with stipules in the form of tendrils. The roots are slender, very long, several from the same collum, reddish-brown, and tough.[4]

The fragrance of the root is considered pleasant with a spicy sweet taste. A different species also known as Sarsaparilla was formerly used extensively as a flavouring agent. Most notably, it was traditionally the ingredient that gave root beer its distinctive taste.

To prepare Sarsaparilla tea, use ¼ to one teaspoon of the powdered root and add ~ 300ml hot water. Thereafter, leave it to steep for 5-10 minutes. Honey or agave can be added if preferred