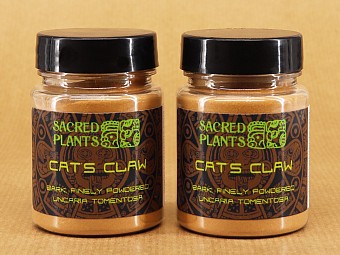 Cat's Claw is a traditional herbal used by numerous cultures in the Amazon river basin. The Ashinika tribe of central Perú has been most widely associated with its ethnomedical use but other tribes such as the Aguaruna, Cashibo, Conibo, and Shipibo are thought to have used Cat's Claw for over 2000 years. More information below. 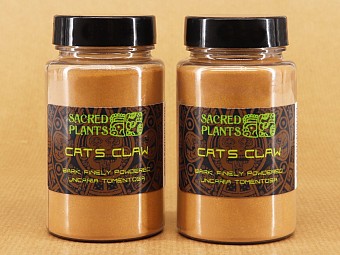 Cat's Claw or Uña de Gato is derived from the bark of a large woody vine, commonly known as Uncaria tomentosa, although natives use Uncaria guianensis interchangeably. It's name is derived from the claw-like thorns that grow along the vine's pedicule. It is a traditional herbal used by numerous cultures in the Amazon river basin. The Ashinika tribe of central Perú has been most widely associated with its ethnomedical use but other tribes such as the Aguaruna, Cashibo, Conibo, and Shipibo are thought to have used Cat's Claw for over 2000 years. Cat's Claw is a wonderful gift of nature.

Allergen Statement: We hereby certify that Cat's Claw powder we sell does not contain any substances causing allergies or intolerances as ingredients or by possibility of cross contamination. The list of allergens which are likely to cause adverse reactions in susceptible individuals is provided in Annex IIIa of Directive 2007/68/EC. Please note that this statement is based on the information provided by the manufacturer of the product.

Cat's Claw has been used by the Aguaruna, Asháninka, Cashibo, Conibo, and Shipibo tribes of Peru for at least 2,000 years. The Asháninka Indian tribe in central Peru has the longest recorded history of use of the plant. They are also the largest commercial source of Cat's Claw from Peru today.  In herbal medicine today, Cat's Claw is employed around the world for many different conditions.[2]

The inner bark of Cat's Claw is used to make liquid extracts, capsules, and teas. Preparations of Cat's Claw can also be applied to the skin.[3]

Uncaria tomentosa is a liana in the Rubiaceae (Coffee family), deriving its name from hook-like thorns that resemble the claws of a cat. U. tomentosa can grow up to 30 meter tall, climbing by means of these thorns. The leaves are elliptic with a smooth edge, and grow in opposite whorls of two. Cat's Claw is indigenous to the Amazon rainforest, with its habitat being restricted primarily to the tropical areas of South and Central America.[5]

Pregnant women, organ transplant recipients, and individuals who have autoimmune conditions should avoid taking cat’s claw.[4] Individuals allergic to plants in the Rubiaceae family and different species of Uncaria may be more likely to have allergic reactions to Cat's Claw.

There are other plants which are known as Cat's Claw (or Uña de Gato) in Mexico and Latin America; however, they are entirely different plants, belonging to neither the Uncaria genus, nor to the Rubiaceae family. Some of the Mexican Uña de Gato varieties are known to have toxic properties.[5]