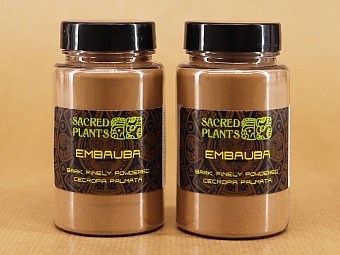 Cecropia Palmata also known as the Snakewood tree is an evergreen tree usually growing to around 15 metres tall. The tree is harvested from the wild for its edible fruit and leaves. Sometimes it is also grown as an ornamental, being valued for its large, umbrella-shaped canopy that casts only a light shade and so allows other plants to grow underneath it.

Cecropia Palmata is a fast growing tree, variously described as a pioneer species, early successional or early mid-succession species. Cecropia Palmata is a light demanding, shade intolerant species, and seeds require full sunlight for germination to occur and in such conditions germination can reach 80-90%. The leaves of seedlings are unlobed and downy on both sides. Seedlings grow rapidly and can reach 15 cm in 10 weeks. In one year, Cecropia Palmata trees can reach 2 m tall. The maximum height of 20-25 m is reached after approximately 10 years and the species has a lifespan of 20-30 years. Trees appear to have only a superficial root systems and are such easily uprooted.

The branches and leaf petioles of Cecropia species are often hollow and can harbour stinging ants. The trees attract the ants by means of producing a honey-like sap and the ants respond by working to keep the tree free of leaf-eating pests - which can include humans [1].

Cecropia Palmata ranges from southern Mexico through Central America to northern South America, Guyana, Trinidad and Tobago, and Jamaica, and has been introduced in Africa, Asia and the Pacific. The species has been listed as one of the hundred worst invasive alien species by the Invasive Species Specialist Group.[2]

Edible Uses: Fruit - raw or cooked. The ripe fruits have the consistency and somewhat the flavour of figs. They can be used as a filling for cakes [3]. Young buds - cooked and eaten as a potherb. The report does not specify if it is the flower or the leaf buds [3].

[3] Cornucopia II, Kampong Publications, California, 1998
The second edition of an excellent guide to the edible uses of plants, though it does not give any details of cultivation etc.