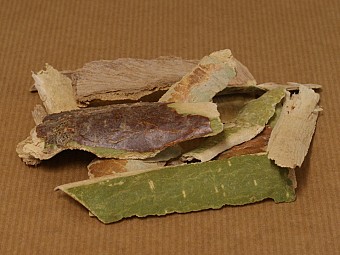 Emburana (Amburana cearensis). This is an often used ingredient in Rapé preparations. The parts used are the bark and the seeds of Emburana, which have antispasmodic and emmenagogic properties. To prepare the tea, use the bark and/or the seeds of the Emburana in the proportion of two tablespoons for each liter of water. More information can be found below.

Its scientific name is Amburana Cearensis, it is native to the caatinga, the northeastern savannah, its size can reach up to ten meters height. One of its most appreciated and striking features are its small whitish flowers, which form beautiful bunches over the branches and exude a very pleasant aroma. The bark of the emburana has a characteristic red color and is much appreciated for its flavor and medicinal properties. Because of its unique smell it is widely used for aromatization for example in cachaça or tobacco products like rapé or cigars.

Emburana (Amburana cearensis). The parts used for medicinal purposes are the bark and the seeds of Emburana, which have antispasmodic and emmenagogic properties. In addition, they have aromatic, anticoagulant, anti-inflammatory, bronchodilator, cardiotonic, diaphoretic, stimulant, estomachic, febrile, narcotic properties. Tea is indicated for pulmonary affections, balm of the airways, asthenia, fever, influenza, hemorrhage, inflammation, cold, intestinal and uterine colic, bronchitis, cough and asthma. Among its active principles are coumarin and hydrocoumarin, flavonoids, vanillic acid, glycerides of palmitic, linoleic, oleic and stearic acids, as well as containing a protein that is capable of rendering trypsin and coagulation factor XII inactive.

To prepare the tea, use the bark and the seeds of the Emburana in the proportion of two tablespoons for each liter of water. Put the bark, seeds and water in a container and bring to the fire. Once boiling, let it cook for about ten minutes and then remove from the heat. Cover and let the mixture stand for approximately ten minutes. After that time, cool it and drink without sweetening. The indicated dose is two to three cups daily. Before consuming any medicine, it is important to consult your doctor to learn about interactions with other medicines. Embryonic tea is contraindicated for patients with blood clotting disorders.

Against high fever in children, two tablespoons of peels are cooked in a liter of water, let it boil for 10 minutes and when cooling, bathe the little ones. Internal use is mostly taken as tea but can be in pills, syrup produced by cooking the bark and seeds and powder of the crushed seeds.

Attention: They have not been reported against indications or side effects from the use of Emburana, however, it should be kept in mind that any drug treatment - be it natural or drug - should be guided and accompanied by a trusted specialist physician.