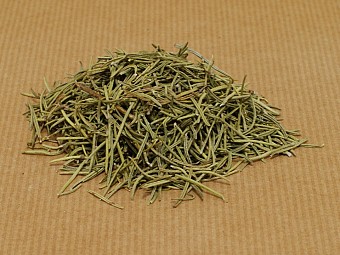 Excellent quality Rosemary from Peru. Locally this herb is called Romero and is used as a spice as well as an incense. The leaves can also be used in Rapé preparations, by adding some (finely powdered) leaves, or the ashes thereof, to the recipe.

Rosemary belongs to the Lamiaceae, commonly known as the mint family. It is related to other well-known herbs such as the basils (Ocimum), thymes (Thymus) and mints (Mentha), but its closest relative is the genus Salvia, which includes at least 900 species. One of these is sage (Salvia officinalis). Many scientists believe that rosemary is so similar to Salvia that it should be included in this group. Salvia and rosemary both have only two stamens (male organs of the flower, containing pollen), whereas in the mint family the usual number of stamens is four.

A member of the mint family, rosemarinus officinalis is a woody, perennial herb whose needle-like leaves, white, pink, purple or blue flowers and low maintenance requirements make it a popular landscaping plant. It is perhaps even better known as a food seasoning to flavour meats and many Mediterranean dishes. [1]

In addition to being a fine flavouring of many Mediterranean dishes, Rosemary develops a delicate flavour when used as an incense. Put 1 tablespoon of rosemary on top of the charcoal, and enjoy the refreshing and purifying scent. The leaves can be ground into a fine powder, or they can be applied as a whole.